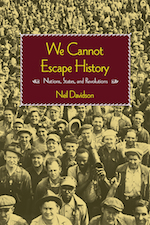 Neil Davidson explores classic themes of nation, state, and revolution in this collection of essays. Ranging from the extent to which nationalism can be a component of left-wing politics to the difference between bourgeois and socialist revolutions, the book concludes with an extended discussion of the different meanings history has for conservatives, radicals, and Marxists.

Neil Davidson is the author of The Origins of Scottish Nationhood (2000), Discovering the Scottish Revolution (2003), for which he was awarded the Deutscher Prize, How Revolutionary Were the Bourgeois Revolutions? (Haymarket, 2012), and Holding Fast to An Image of the Past (Haymarket, 2013). Davidson lectures in Sociology in the School of Political and Social Science at the University of Glasgow, Scotland.