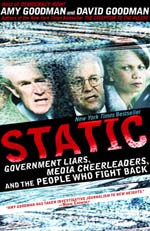 STATIC
Government Liars, Media Cheerleaders,
and the People Who Fight Back

By Amy Goodman and David Goodman

From the authors of the New York Times bestseller The Exception to the Rulers comes a new book that pushes back against official lies and spin and gives voice to the silenced majority.

In Static, the brother-sister team of Amy Goodman, host of the popular international TV and radio news show Democracy Now!, and investigative journalist David Goodman once again take on government liars, corporate profiteers, and the media that has acted as their megaphone. They expose how the Bush administration has manipulated and fabricated news and how the corporate media has worked hand in glove with the powerful to deceive the public. The Goodmans cut through the spin and static to offer the truth about war, torture, and government control of the media. Mixing investigative reporting and interviews, Static presents voices of dissidents, activists, and others who are too often frozen out of official debate, to shed new light on urgent issues of war and peace. Ultimately, Static is a hopeful, fighting rallying call for people to take back our government, our media,and our world.

“Amy Goodman and her author brother, David Goodman, follow up their bestseller The Exception to the Rulers by again synthesizing radio interviews and commentary with secondary sources on charged issues that the corporate media too often overlook. ‘The Bush administration is obsessed with controlling the flow of information,’ the authors declare, citing examples from Iraq to Katrina. One glaring hypocrisy is the president’s claim that ‘we do not render to countries that torture’; the authors find mounds of evidence to the contrary. They also remind us of the unseemly ties between Republican Party supporters and Pentagon contracts in Iraq. In one hilarious episode — lightly reported in the U.S. media — a British activist group, the Yes Men, hoaxed the BBC regarding Dow Chemical’s apparent willingness to apologize for the Bhopal disaster. On Goodman’s show, a former U.S. Army interrogator acknowledged that 98% of those picked up in Iraq ‘had not done anything.’ A brief final section highlights those who fight back, including antiwar mom Cindy Sheehan, and a former British ambassador in Uzbekistan who blew the whistle on that regime’s human rights abuses. The book should be popular with fans of the show.“

David Goodman is an award-winning independent journalist and the author of five books, including the critically acclaimed Fault Lines: Journeys Into the New South Africa (University of California Press, 1999; revised paperback, 2002). Archbishop Desmond Tutu hailed Fault Lines as “a searingly honest book by someone who really knows his subject.” He is also a contributing writer for Mother Jones, and his articles have appeared in the Washington Post, Outside, Washington Quarterly, Christian Science Monitor, Boston Globe, The Nation, Village Voice, and other publications.

Amy and David Goodman are the authors of two other recent books:

Democracy Now! is a national, daily, independent, award-winning news program hosted by award-winning journalists Amy Goodman and Juan Gonzalez. Pioneering the largest public media collaboration in the U.S., Democracy Now! airs on over 500 radio and TV stations, including Pacifica, NPR, community, and college radio stations; on public access, PBS, satellite TV stations (DISH network: Free Speech TV channel 9415 and Link TV channel 9410; DIRECTV: Link TV channel 375); on the World Radio Network’s European Service and on the Community Broadcasting Association of Australia service; as a podcast, automatically downloaded to your computer or portable audio player; and streams live Monday to Friday at 8 am EST at http://www.democracynow.org. The Democracy Now! podcast is one of the most popular on the web. In 2006, Time Magazine identified Democracy Now! along with Meet the Press as their “Pick of the Podcasts.” More than 70 radio stations throughout the US and Latin America now carry Democracy Now!’s daily Spanish headlines. More than 15,000 people signed up for Boletín, a text version of its Spanish headlines. Today, 75,000 people receive its English language Daily Digest.