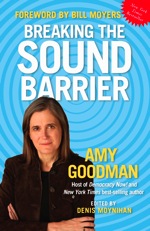 Amy Goodman gives voice to the heroic stories of people the corporate media exclude and ignore.

Amy Goodman began writing a weekly column, “Breaking the Sound Barrier,” for King Features Syndicate in 2006. This timely new collection gives voice to the many ordinary people standing up to corporate and government power — and refusing to be silent.

Amy Goodman is the best-known voice of independent media today; her radio and television program Democracy Now! is broadcast on over 500 stations nationwide.

These punchy, lively columns concentrate Goodman’s skill of “going where the silence is” and telling the stories the major media usually ignore.

In Goodman’s words, they are “a way to reach out to many different audiences. I think people recognize the media has failed them. People are tired of hearing the same small circle of pundits who know so little about so much, explain the world to us, and getting it so wrong. We need to break the sound barrier with other voices, with experts in their own communities, to provide a forum for people to speak for themselves.”

“You can learn more of the truth about Washington and the world from one week of Amy Goodman’s Democracy Now! than from a month of Sunday morning talk shows. Make that a year of Sunday talk shows. That’s because Amy, as you will discover on every page of this book, knows the critical question for journalists is how close they are to the truth, not how close they are to power.”

From the Preface by Bill Moyers

“Amy Goodman is a towering progressive freedom-fighter in the media and the world. Breaking the Sound Barrier is another expression of her vision and courage.”

“If you are one of the millions of people who love listening to Amy Goodman on Democracy Now!, and appreciate the passion, intelligence, and insight she brings to her subjects, I’ve got very good news: she’s just as compelling, thought-provoking, and fearless on the page. By bringing us the perspectives of those too often denied access to the media megaphone, Breaking the Sound Barrier is crusading journalism at its best.”

“Amy Goodman is one of the most important voices in America. She defies the noise and clamor of celebrity gossip. She challenges the manipulation of information and dissemination of lies by the power elite. She refuses to pander to a culture where news is seen as another form of entertainment designed to bolster corporate profits. She holds steadfast to the core values of our trade. Her integrity and honesty remind us that a culture that cannot distinguish between illusion and reality dies.”

“Amy Goodman has consistently set the bar for common sense journalism. Every weekday morning Democracy Now! is the one place you can learn of events, usually straight from the horse’s mouth, and not from a ‘news model’ telling you what to think. There is no one who should be more on mainstream media, every day reminding us and giving us a glimpse of the power of one, than Amy. She will go down in history as one of the voices of democracy’s greatest champions. A collection of all of her hard work, on our behalf, is a great reference tool … and brilliantly Amy!”