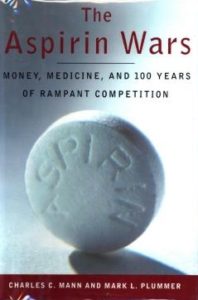 No drug in the world outsells aspirin. With billions of dollars at stake, and no medically significant differences among the hundreds of brands around the globe, rival drug makers have been driven to the extremes of corporate warfare. Authors Mann and Plummer look inside this world of relentless competition to show the ploys, the battles, the bursts of extraordinary marketing, advertising and litigation that have resulted—and relate the unique and little-known medical history of the drug itself. The Aspirin Wars penetrates the wilder shores of capitalism to reveal the essence of business competition at its canniest.

“Starting with an 1886 accident in Alsace (then part of Germany), science writers Charles Mann and Mark Plummer use The Aspirin Wars to reveal behind-the-scenes machinations in both laboratory and boardroom…. The Aspirin Wars has the answers to questions I never thought to ask…. Business needs, it seems, are as crucial as laboratory research in determining what ends up on the drugstore counter. Whatever the formula, I suspect I will never innocently swallow another analgesic again.”

“Science writer Charles C. Mann and economist Mark Plummer have pooled their talents in an ambitious effort to record the saga of the discovery of aspirin and its uses, as well as the no-hold-barred conflicts over the production and marketing of the popular painkiller and the medicines that might substitute for it. The story they tell turns out to be epic in scope…. Aspirin Wars provides readers with a broad historical perspective… [and] raises important questions and invites fresh thinking about both unfettered competition and government regulation, neither of which emerges from the book in a particularly attractive light.”

Award-winning science writer Charles C. Mann is the author of 1493, a New York Times best-seller, and 1491, which won the U.S. National Academy of Sciences’ Keck award for the best book of the year. A correspondent for The Atlantic Monthly, Science, and Wired, he has covered the intersection of science, technology, and commerce for many newspapers and magazines here and abroad, including National Geographic, the New York Times, Vanity Fair, and the Washington Post.

Mark Plummer was a distinguished economist and former Discovery Institute fellow. He worked for many years in the Conservation Biology Division of the National Marine Fisheries Service of NOAA. He co-authored two books with Charles C. Mann, Aspirin Wars and Noah’s Choice.