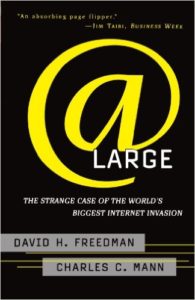 Hailed as “a chilling portrait” by The Boston Globe and “a crafty thriller” by Newsweek, this astonishing story of an obsessive hacker promises to change the way you look at the Internet forever.

At Large chronicles the massive manhunt that united hard-nosed FBI agents, computer nerds, and uptight security bureaucrats against an elusive computer outlaw who broke into highly secured computer systems at banks, universities, federal agencies, and top-secret military weapons-research sites. Here is “a real-life tale of cops vs. hackers, by two technology writers with a flair for turning a complicated crime and investigation into a fast-moving edge-of-your-seat story” (Kirkus Reviews, starred). At Large blows the lid off the frightening vulnerability of the global online network, which leaves not only systems, but also individuals, exposed.

“Freedman and Mann…understand technology, computers, and security issues. Their message in At Large is clear and convincing.”

“A fascinating story…. Read it and you’ll never look at the Internet or your computer quite the same.”

Award-winning science writer Charles C. Mann is the author of 1493, a New York Times best-seller, and 1491, which won the U.S. National Academy of Sciences’ Keck award for the best book of the year. A correspondent for The Atlantic Monthly, Science, and Wired, he has covered the intersection of science, technology, and commerce for many newspapers and magazines here and abroad, including National Geographic, the New York Times, Vanity Fair, and the Washington Post.

David H. Freedman is the author of Brainmakers, the senior editor of Forbes ASAP, and a contributing editor to Discover. He lives in Needham, Massachusetts.