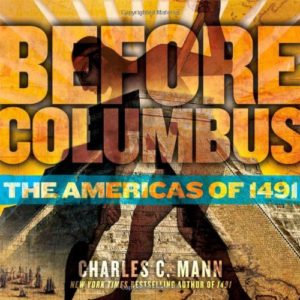 BEFORE COLUMBUS
The Americas of 1491

Adapted from the book by Rebecca Stefoff

ALA Best Books for Young Adults

NYPL 100 Titles for Reading and Sharing

A companion book for young readers (grades 3–7) based on 1491: New Revelations of the Americas Before Columbus, the groundbreaking bestseller by Charles C. Mann.

“In this beautifully illustrated and concise adaptation of 1491, Mann paints a superb picture of pre-Columbian America. In the process, he overturns the misconceived image of Natives as simple, widely scattered savages with minimal impact on their surroundings. Well-chosen, vividly colored graphics and photographs of mummies, pyramids, artifacts, and landscapes as well as the author’s skillful storytelling will command the attention of even the most reluctant readers. Eye-catching sidebars and oversize chapter headings seem to pop from the pages. Mann constructs the narrative around three crucial questions that continue to confound historians today: Was the New World really new? Why were the Europeans successful? What ecological impact did Natives have on their surroundings? From the pre-Columbian genetic engineering of maize to the existence of pyramids older than the Egyptian variety, Mann’s lucid answers to these questions represent current scholarly opinion and point the way toward future exploration and discovery. Students and teachers will benefit greatly from this engaging exploration of America’s most overlooked and misunderstood historical periods.”