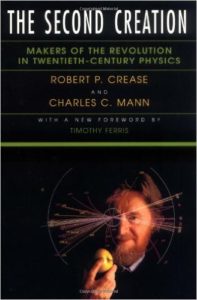 THE SECOND CREATION
Makers of the Revolution in Twentieth-Century Physics

With a new foreword by Timothy Harris

The Second Creation is a dramatic—and human—chronicle of scientific investigators at the last frontier of knowledge. In this revised edition, Robert Crease and Charles Mann take the reader on a fascinating journey in search of “unification” (a description of how matter behaves that can apply equally to everything) with brilliant scientists such as Niels Bohr, Max Planck, Albert Einstein, Erwin Schrödinger, Richard Feynman, Murray Gell-Mann, Sheldon Glashow, Steven Weinberg, and many others. They provide the definitive and highly entertaining story of the development of modern physics, and the human story of the physicists who set out to find the “theory of everything.”

The Second Creation tells the story of some of the most talented and idiosyncratic people in the world—many times in their own words. Crease and Mann conducted hundreds of interviews to capture the thinking and the personalities as well as the science. The authors make this complex subject matter clear and absorbing.

“Gives a real feeling of the intense work that goes into major scientific discoveries and of the people who can deal with this kind of intellectual and emotional pressure.”

“An absolutely marvelous book. No one who cares about science should miss reading it.”

Timothy Ferris, author of Coming of Age in the Milky Way and The Mind’s Sky

“Without qualification, this is the best account of the phenomenal story of physics in the twentieth century.”

Dick Teresi, coauthor of The God Particle and winner of the 1994 American Institute of Physics Science Writing Prize

Robert P. Crease is a professor of philosophy at SUNY-Stony Brook, where he uses laboratory history to examine key issues in the philosophy of science, science studies, and ethics. His books include The Prism and the Pendulum: The Ten Most Beautiful Experiments in Science (Random House, 2003), Making Physics: A Biography of Brookhaven National Laboratory, 1946–1972 (University of Chicago Press, 1999) and The Play of Nature, Experimentation as Performance (Indiana University Press, 1993), along with other edited collections and translated works. Crease organized the Science Studies Forum, an interdisciplinary group of faculty in the social sciences, and is active in organizing and teaching ethics and science courses, including the training programs for the protection of human subjects in research. Crease writes a monthly column, “Critical Point,” about science and society issues for Physics World.

Award-winning science writer Charles C. Mann is the author of 1493, a New York Times best-seller, and 1491, which won the U.S. National Academy of Sciences’ Keck award for the best book of the year. A correspondent for The Atlantic Monthly, Science, and Wired, he has covered the intersection of science, technology, and commerce for many newspapers and magazines here and abroad, including National Geographic, the New York Times, Vanity Fair, and the Washington Post. In addition to 1491 and 1493, he is the co-author of five other books.