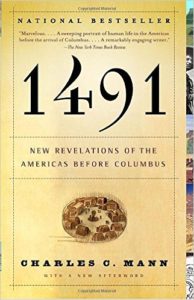 1491
New Revelations of the Americas Before Columbus

Winner of the U.S. National Academy of Sciences’ Keck award for the best book of the year

In this groundbreaking work of science, history, and archaeology, Charles C. Mann radically alters our understanding of the Americas before the arrival of Columbus in 1492.

Contrary to what so many Americans learn in school, the pre-Columbian Indians were not sparsely settled in a pristine wilderness; rather, there were huge numbers of Indians who actively molded and influenced the land around them. The astonishing Aztec capital of Tenochtitlan had running water and immaculately clean streets, and was larger than any contemporary European city. Mexican cultures created corn in a specialized breeding process that it has been called man’s first feat of genetic engineering. Indeed, Indians were not living lightly on the land but were landscaping and manipulating their world in ways that we are only now beginning to understand. Challenging and surprising, this a transformative new look at a rich and fascinating world we only thought we knew.

“Marvelous. . . . A sweeping portrait of human life in the Americas before the arrival of Columbus. . . . A remarkably engaging writer.”
The New York Times Book Review

“Fascinating. . . . A landmark of a book that drops ingrained images of colonial American into the dustbin, one after the other.”

“A ripping, man-on-the-ground tour of a world most of us barely intuit. . . . An exhilarating shift in perspective. . . . 1491 erases our myth of a wilderness Eden. It replaces that fallacy with evidence of a different genesis, exciting and closer to true.”

“Mann tells a powerful, provocative and important story. . . . 1491 vividly compels us to re-examine how we teach the ancient history of the Americas and how we live with the environmental consequences of colonization.”
The Washington Post Book World

“Provocative. . . . A Jared Diamond-like volley that challenges prevailing thinking about global development. Mann has chronicled an important shift in our vision of world development, one out young children could end up studying in their text books when they reach junior high.”
San Francisco Chronicle

“Marvelous. . . . A revelation. . . . Our concept of pure wilderness untouched by grubby human hands must now be jettisoned.”
The New York Sun

“Monumental. . . . Mann slips in so many fresh, new interpretations of American history that it all adds up to a deeply subversive work.”
Salon