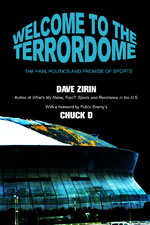 WELCOME TO THE TERRORDOME
The Pain, Politics, and Promise of Sports

“Brother Dave Zirin is the finest, most important writer on sports and politics in America.”

“In a world dominated by advertising dollars, company men, brand managers, player reps and billionaire owners, Zirin is that rare breed: an old-fashioned progressive. A muckraker… He’s the author of eight books and counting, including What’s My Name Fool?: Sports and Resistance in the United States, and A People’s History of Sports in the United States: 250 Years of Politics, Protest, People, and Play, which have made him a standard-bearer for progressive athletes, fans, and scholars, and earned the admiration of legends like Jim Bouton, Frank Deford, Lester Munson, Howard Zinn, and Chuck D.”

“Dave Zirin is the best young sportswriter in America because he’s the one who understands the x’s and o’s, can arrange them vividly and show us what they mean in a world spinning out of control.”

Chuck D redefined rap music and hip hop culture as leader and co-founder of legendary rap group Public Enemy. Spike Lee calls him “one of the most politically and socially conscious artists of any generation.” He co-hosts a weekly radio show on Air America.

The John Carlos Story: The Sports Moment that Changed the World