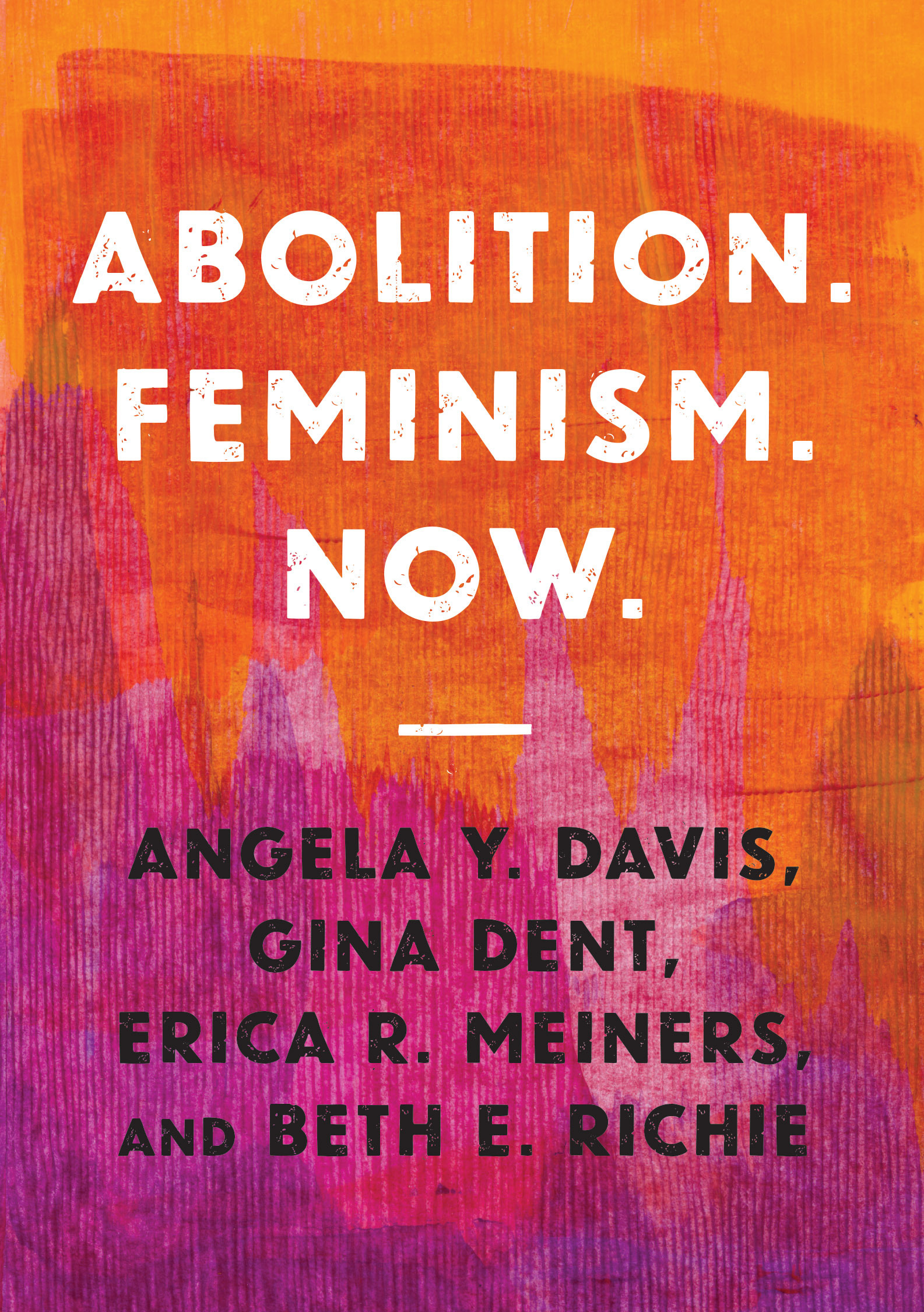 Abolition. Feminism. Now. is a celebration of freedom work, a movement genealogy, a call to action, and a challenge to those who think of abolition and feminism as separate—even incompatible—political projects.

Amplifying the analysis and the theories of change generated out of vibrant community based organizing, Abolition. Feminism. Now. highlights necessary historical linkages, key internationalist learnings, and everyday practices to imagine a future where we can all thrive.

“Abolition. Feminism. Now. is a demand in every way. It pushes readers not to accept simple stories but to embrace complexity and new ways of thinking. But it is also a celebration of feminist agitators and freedom fighters who undermine the carceral state while building new sources safety, repair, and accountability. Of an ever-changing, growing, and evolving movement that puts survivors at the center of its analysis, not the periphery. And of a historic political struggle that considers freedom worth the fight. And, in the end, the authors make it clear that abolition feminism isn’t on its way; it’s already unfolding all around us.”

“This is the book we’ve all needed for a long long time.”

“In this powerful, wise and well-crafted book, filled with insight and provocation, Angela Y. Davis, Gina Dent, Erica R. Meiners, and Beth E. Richie make it patently and abundantly clear why abolitionist feminism is necessary. Offering vivid snapshots from a political movement, the book explains how organizing to end violence without turning to violent institutions such as prisons and the police as remedies, is how we learn what we need to do to make change possible. Abolitionist feminists, they teach us, in taking up the slow, practical and painstaking work of campaigning, also expand our political horizons and create imaginative tools for world building. Attentive to histories of organising that are too quickly erased, and alive to new possibilities for working collectively in the present time, this book is as capacious and demanding as the abolitionist feminism it calls for. It gives us a name for what we want. Abolitionism. Now.”

“This extraordinary book makes the most compelling case I’ve ever seen for the indivisibility of feminism and abolition, for the inseparability of gendered and state violence, domestic policing and militarism, the street, the home, and the world..”

“This little book is a massive offering on where we have been, where we are right now, and what we are imagining and organizing into being as abolition feminists. Breaking us out of every container and binary, Abolition. Feminism. Now. invites us to be in the complexity and contradictions of our humanity in the massive intersectional work of structural change. The ideas of abolition and feminism are rivers moving through us towards a liberated future which we can already feel existing within and between us. Invigorating and rooting, this text is instantly required reading, showing us how everything we have done and are doing is accumulating towards a post-punitive, transformative future—our lineage is bursting with brilliance! And we are prefiguring this possibility—wherever we are is a site of practice, a place where we are collectively becoming accountable to a justice infused with humanity, compassion and the belief that we can change. This book is a lineage of words and visuals, showing us the beauty of our efforts, and gently reminding us that we are not failing—we are learning, and we are changing.”

adrienne maree brown, author of Emergent Strategy: Shaping Change, Changing Worlds and We Will Not Cancel Us and Other Dreams of Transformative Justice

“In Abolition. Feminism. Now., Angela Y. Davis, Gina Dent, Erica R. Meiners, and Beth E. Richie—four visionaries whose longstanding abolitionist work is inseparable from their feminist principles—brilliantly show how abolition feminism has always offered the radical tools we need for revolutionary change. Feminist approaches to the carceral regime reveal the connections between state violence and intimate violence, between prisons and family policing, and between local and global organizing. By illuminating the genealogy of anti-carceral feminism and its vital struggles against all carceral systems, the authors compel us to see the urgent necessity of abolition feminism now.”

Praise for Freedom is a Constant Struggle, by Angela Y. Davis:

“Angela Davis’s new book made me think of what Dear Nelson Mandela kept reminding us, that we must be willing to embrace that long walk to freedom. Understanding what it takes to really be free, to have no fear, is the first and most important step one has to make before undertaking this journey. Angela is the living proof that this arduous challenge can also be an exhilarating and beautiful one.”

“Whether you’ve grown up with the courage and conscience of Angela Davis, or are discovering her for the first time, Freedom Is a Constant Struggle is a small book that will be a huge help in daily life and action, from exposing the ‘prison industrial complex’ that she named long ago to understanding that leaders are only leaders if they empower others. She herself exposes facts and makes connections, but also leads in the most important way by example.”

“Angela Davis once again offers us an incisive, urgent, and comprehensive understanding of systematic racism, the grounds for intersectional analysis and solidarity, and the importance of working together as equals to unmask and depose systems of injustice. This wide-ranging and brilliant set of essays includes a trenchant analysis of police violence against people of color, of the systematic incarceration of black people in America, the grounds of Palestinian solidarity for the Left, the affirmation of transgender inclusion, and the necessity of opposing the G4S corporation and its high-profit empire dedicated to the institutionalization of racism in the name of security. These essays take us back in history to the founders of revolutionary and anti-racist struggle, but they also take us toward the possibility of ongoing intersectional solidarity and struggle. Angela Davis gathers in her lucid words our luminous history and the most promising future of freedom.”

“In this latest text of her magisterial corpus, Angela Davis puts forward her brilliant analyses and resilient witness here and abroad. In a clear and concise manner, she embodies and enacts ‘intersectionality’ a structural intellectual and political response to the dynamics of violence, White Supremacy, patriarchy, state power, capitalist markets, and imperial policies.”

OTHER TITLES BY ANGELA Y. DAVIS:

Freedom Is a Constant Struggle: Ferguson, Palestine, and the Foundations of a Movement (with Frank Barat)

Angela Y. Davis is professor emerita of history of consciousness and feminist studies at University of California, Santa Cruz. An activist, writer, and lecturer, her work focuses on prisons, police, abolition and the related intersections of race, gender, and class. She is the author of many books, from Angela Davis: An Autobiography to Freedom is a Constant Struggle.

Gina Dent is associate professor of feminist studies, history of consciousness, and legal studies at University of California, Santa Cruz. She is the editor of Black Popular Culture and lectures and writes on African diaspora literary and cultural studies, postcolonial theory, and critical area studies. Her current project, Visualizing Abolition, grows out of her work as an advocate for transformative and transitional justice and prison abolition.

Erica R. Meiners is a professor of education and women’s, gender, and sexuality studies at Northeastern Illinois University. A writer, organizer and educator, Meiners is the author For the Children? Protecting Innocence in a Carceral State, coauthor of The Feminist and the Sex Offender: Confronting Sexual Harm, Ending State Violence, and a coeditor of The Long Term: Resisting Life Sentences, Working Toward Freedom.

Beth E. Richie is head of the Department of Criminology, Law and Justice and professor of Black studies at the University of Illinois at Chicago. Richie is the author of Compelled to Crime: the Gender Entrapment of Black Battered Women and Arrested Justice: Black Women, Violence and America’s Prison Nation and a coeditor of The Long Term: Resisting Life Sentences, Working Toward Freedom.