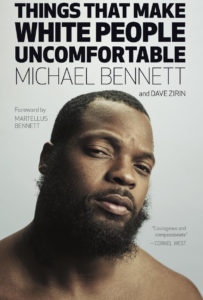 Michael Bennett is a Super Bowl Champion, a three-time Pro Bowl defensive end, a fearless activist, a feminist, a grassroots philanthropist, an organizer, and a change maker. He’s also one of the most scathingly humorous athletes on the planet—and he wants to make you uncomfortable.

Written with award-winning sportswriter and author Dave Zirin, Things That Make White People Uncomfortable is a sports book for our times, a memoir and manifesto as hilarious as it is revealing.

Bennett, a defensive end for the Seattle Seahawks, has gained international recognition for his public support for the Black Lives Matter Movement, women’s rights, and other social justice causes. Bennett donates all his endorsement money and half of the proceeds from his jersey sales to fund health and education projects for poor underserved youth and minority communities, and recently expanded his reach globally to support STEM programming in Africa.

Co-author Dave Zirin has been called the “finest, most important writer on sports and politics in America” by Dr. Cornel West. He is sports editor for The Nation and author of several books, including the critically acclaimed The John Carlos Story, written with 1968 Olympian John Carlos.

“Michael Bennett is an agent of change.”

“Like athletes-turned-authors Kareem Abdul-Jabbar and the late Arthur Ashe, Philadelphia Eagles defensive end Bennett uses his professional fame to shed light on American racism in these astute personal essays… Bennett’s book proves he can tackle the ills of society as capably as he tackles quarterbacks.”

“Bennett goes in hard on everything. Nothing is spared. Not the NFL. Not the Trump administration. Not police brutality. Not even the n-word.”

“A fiery memoir/manifesto by an athlete with his heart in the right place.”

“There are few men I know as conscious, intentional and intersectional in fighting for women’s equality as Bennett – to the point where this author feels inspired to step up my own game.”

“It would be easy for Michael Bennett to remain silent, to play in the NFL and make his mark through accomplishments on the field. Instead Michael has chosen to use his voice and his platform to fight injustice.”

“In his powerful book about the relationship between race and sports, Bennett writes simply, ‘I’ll be a football player for just a few more years, but I’ll be Black forever.’ That line captures the point and the focus of his memoir. Things That Make White People Uncomfortable traverses Bennett’s life from being raised by a teenage mother to going undrafted in the NFL because he wasn’t ‘coachable’ to finding his voice in a professional league that attempts to stifle those who want to raise awareness about social ills. Bennett is brutally honest throughout his book in an effort to challenge fellow professional athletes to champion the causes that matter.”

“Things That Make White People Uncomfortable is a real and unblinkingly raw memoir that is going to make a lot of White people, and people of color too, very uncomfortable. And that is precisely the point. Because Michael Bennett is one of the most outspoken and dynamic athletes in America today, and his co-writer, Dave Zirin, is very clearly our nation’s most fearless sports journalist. Together they are Muhammad Ali and Howard Cosell bringing the noise about race, sports, and the wonderfully diverse life that is Michael Bennett’s journey as a Black man who refuses to be stereotyped. At a time when the protests of sport heroes like Bennett and Colin Kaepernick have once more revealed the huge racial divides that have always been present, what makes this book different, and unique, is that Bennett remixes the past into an unavoidable and necessary dialogue for this 21st century, on his own terms. Indeed, Michael Bennett’s voice echoes that of Jack Johnson, Paul Robeson, Ali. And his voice is that of Malcolm X and Martin Luther King, too. Because Michael Bennett is clear, mad clear, that he is a leader and a change agent, too.

Kevin Powell, author, The Education of Kevin Powell: A Boy’s Journey into Manhood

“There is a tradition of athletes who understand that sports is a way to reach people and change the world. I am proud and humbled to be recognized as part of that tradition. I believe that Michael Bennett’s name deserves mention alongside the best of us. This book doesn’t only explain the roots of Michael Bennett’s courage. It will inspire the people who read it to conquer their fears and fight for what’s right.”

“There is a revolution underway inside professional sports and Michael Bennett is at ground zero. In this revelatory book, he puts everything on the line to share the reasons, strategy, pain and deep thought behind this historic uprising. And he invites us into a vision of justice and liberation that is simply irresistible. This book is pure fire.:

Naomi Klein, author, No Is Not Enough

“Michael Bennett—husband and father, citizen, NFL Pro Bowl Player and Super Bowl MVP—presents a series of perspectives on cultural, institutional, and political realities within the sports arena and beyond that provokes us to a deeper consideration of athlete political activism, activism that today makes many in white America uncomfortable. His arguments are as persuasively reasoned and analytical as they are passionate and moving, as challenging in their message as they are disarming in their humor. Though appropriately titled, the book at core really urges us all to a better understanding of the current saga of athlete protests, protests that are testament to what we already have become as a society and a warning about where we might be headed as a nation, protests that constitute a cautionary tale that should make us all , irrespective of race,  at least a little  ‘uncomfortable,’ perhaps even uncomfortable enough to ‘grow in our own responsiveness to the call to form that more Perfect Union.’ A must-read  for anyone looking to better understand today’s political climate in American sports.”

Harry Edwards, author, The Revolt of the Black Athlete

“One of the most outspoken and progressive voices in the NFL”

The Root, “The Root 100 Most Influential African Americans 2017′

“Michael Bennett is a Warrior for Justice.  His spirit is in line and step with all those freedom fighters who came before him.”

Craig Hodges, author of Long Shot: The Triumphs and Struggles of an NBA Freedom Fighter

“In a social media age where professional athletes are regularly criticized by anyone with a Twitter account, Michael Bennett has the courage to stand up for what he believes despite the possibility of losing fans, support or endorsements. Whether it’s speaking on police brutality, systemic racism, Black Lives Matter, or human rights for Palestinian people he doesn’t hesitate to lend his voice. This book is a live wire. It’s electric.”

“With vulnerability, humility, and the courage to tell the truth, Michael Bennett reminds us at the heart of every social awakening are ordinary people who choose justice and resistance over silence and comfort. In a profession where independent thought is punished, Michael Bennett lays it all on the line with this book. Bennett’s insights into everything from Black Lives Matter, to college athletics, to intersectional feminism will not only make white people uncomfortable, but it will challenge the status quo of our entire society.”

“Fresh from his icon cementing appearance on the cover of The New Yorker with Martin Luther King, Jr., and Colin Kaepernick, Michael Bennett proves he’s worth the hype with this brilliant, disturbing, and courageous exploration of race and whiteness in America. Just as he does on the field, Bennett flies to problem areas with grace and speed, plowing through knotted social issues, tackling difficult matters, and defending democracy against its determined foes. With this book, Bennett joins the ranks of our fiercest activist athletes who understand that a pair of cleats pales in comparison to a set of balls. Michael Bennett is not only a champion, he’s a modern warrior for justice!”

“This book is a courageous and compassionate story of a great athlete and grand human being full of deep care for his fellow citizens! Don’t miss it!”

Michael Bennett is a three-time Pro Bowler, Pro Bowl MVP, Super Bowl Champion, and two-time NFC Champion. He has gained international recognition for his public support for the Black Lives Matter Movement, women’s rights, and other social justice causes. In 2017, he was named one of the 100 Most Influential African Americans by The Root, was the Seattle Seahawks nominee for the NFL’s Walter Payton Man of the Year award, and was honored along with his brother Martellus with a BET Shine a Light award for exceptional service. He is the cofounder with Pele Bennett of The Bennett Foundation, which educates underserved children and communities through free, accessible programming. He has held free camps and health clinics in Seattle, in his hometown of Houston, in his current offseason home, Honolulu, and in South Dakota on the Lower Brule Sioux Tribe. He donates all of his endorsement money and the proceeds from his jersey sales to fund health and education projects for poor and underserved youth and minority communities, and recently expanded his reach globally to support STEM programming in Africa. He is the proud father of three daughters, Peyton, Blake, and Ollie.

Martellus Bennett is a Super Bowl champion, NFL Pro Bowler, children’s book author, and younger brother to Michael Bennett. His first children’s book, Hey A. J., It’s Saturday, was released in 2016 through his own company, The Imagination Agency