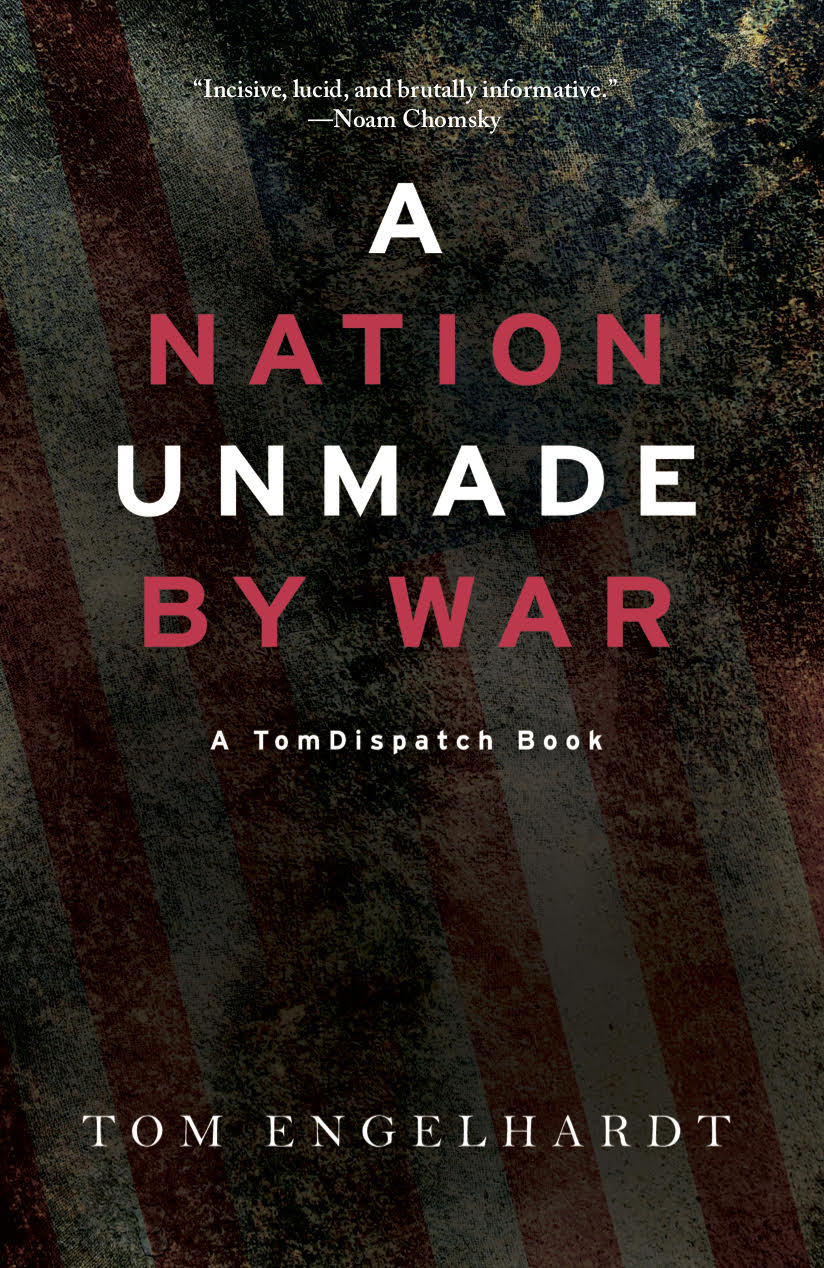 A NATION UNMADE BY WAR

Starting with the election from hell, A Nation Unmade by War surveys American exceptionalism in the age of absurdity. As Tom Engelhardt argues, despite having a more massive, technologically advanced, and better-funded military than any other power on the planet, in more than a decade and a half of constant war across the Greater Middle East and parts of Africa, the United States has won nothing, while only contributing to a world growing more chaotic by the second.

From its founding, the United States has been a nation made by wars. With penetrating analysis and characteristic wit, Engelhardt ponders whether in this century its citizenry and government will be unmade by them.

“Unlike the myriad of lesser writers distracted by the latest antics of the man with the orange hair, the brilliant Tom Engelhardt keeps our focus where it should be: on the vast militarized empire whose leaders’s belief that they can control the world drains our tax dollars, undermines our children’s future, and sends young men and women to die in an unending series of fruitless wars.”

Adam Hochschild, author of Spain in Our Hearts

“The mainstream media call it the “Age of Trump.” Tom Engelhardt knows better: It’s the ‘Era of America Unhinged.”‘This new collection of essays gives us Engelhardt at his very best: incisive, impassioned, and funny even, in a time of great darkness.”

“Tom Engelhardt is a tireless analyst of the miseries of American Empire.  In this indispensable book he shines an unrelenting spotlight on the steep cost to everyday Americans of the sunny fantasies about Middle East dominance retailed by generals, politicians and think tank rats inside the Beltway–fairy tales intended to obscure the dark failures of this enterprise.”

“We Americans have learned to sleep through our multiple wars, but Tom Engelhardt relentlessly shakes us awake. For sixteen years now, he has watched in astonishment and written the scene-by-scene review of this imploding empire and he only becomes sharper as old reels rewind and play again. In this volume, the nation wasted at home by its profligate wars abroad picks a big orange emperor, flanked by his very own generals, to lead us on into…well, just read the book!”

“Since September 11, no one has had a keener eye for American militarism, hypocrisy, and flat-out folly than Tom Engelhardt”

“In his searing new book, A Nation Unmade by War, Tom Engelhardt has composed a requiem for a nation turned upside down by the relentless pursuit of global power. A devastating critique of the national security state, A Nation Unmade takes the reader from Nixon and Vietnam to Bush and the Iraq War through post-9/11 America, chronicling the errors, deceptions, and policy decisions which have ushered in a state of permanent war, reducing nations to rubble, wreaking chaos and confusion at home, and threatening the very principles upon which the country was founded. A must read for any student of 21st America.”

Karen J. Greenberg, author of Rogue Justice: The Making of the Security State

Tom Engelhardt created and runs the TomDispatch.com website, a project of the Nation Institute, where he is a fellow. He is the author of Shadow Government, and The American Way of War and The United States of Fear, both published by Haymarket Books, a highly praised history of American triumphalism in the cold war, The End of Victory Culture, and a novel, The Last Days of Publishing.

Many of his TomDispatch interviews were collected in Mission Unaccomplished: TomDispatch Interviews with American Iconoclasts and Dissenters. With Nick Turse, he has written Terminator Planet: The First History of Drone Warfare. He also edited The World According to TomDispatch: America in the New Age of Empire, a collection of pieces from his site that functions as an alternative history of the mad Bush years. He has worked as an editor at Pacific News Service in the early 1970s, and, these last four decades as an editor in book publishing. For fifteen years, he was senior editor at Pantheon Books, and is now Consulting Editor at Metropolitan Books, as well as the cofounder and coeditor of Metropolitan’s the American Empire Project, where he has published bestselling works by Chalmers Johnson, Andrew Bacevich, Noam Chomsky, and Nick Turse, among others. Many of the authors whose books he has edited and published over the years now write for TomDispatch.com. For a number of years, he was also a Teaching Fellow at the Graduate School of Journalism at the University of California, Berkeley