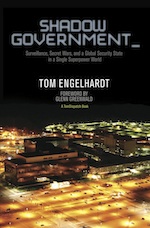 A powerful survey of a militarized America building a surveillance structure unparalleled in history.

In 1964, a book entitled The Invisible Government shocked Americans with its revelations of a growing world of intelligence agencies playing fast and loose around the planet, a secret government lodged inside the one they knew that even the president didn’t fully control. Almost half a century later, everything about that “invisible government” has grown vastly larger, more disturbing, and far more visible. In his new book, Tom Engelhardt takes in something new under the sun: what is no longer, as in the 1960s, a national security state, but a global security one, fighting secret wars that have turned the president into an assassin-in-chief. Shadow Government offers a powerful survey of a democracy of the wealthy that your grandparents wouldn’t have recognized.

“In his regular incisive and often searing columns, Tom Engelhardt has uncovered layer after layer of deceit, fraud, and distortion to reveal to us harsh truths about power and its exercise that we must comprehend, and resist, and reverse, if there is to be any hope of decent survival. Shadow Government is essential reading.”

“This is a book about secrets and surveillance, but I’m here to tell you one secret its contents won’t. For more than a dozen years, Tom Engelhardt and his website or blog or postnewspaper wire service Tomdispatch.com have been one of the great forces on the side of clarity, democracy, openness, and really good writing. Tom himself, a legendary book editor, is also one of the country’s most eloquent and tenacious political writers, electronically publishing three essays a week for all these years and writing many of them himself. This collection, focused on the new Orwellianism, is some of the finest writing and finest public service gathered together in book form for your portable pleasure and outrage.”

“Tom Engelhardt is an iconoclast, but he also is the latest exemplar of a great American tradition. Like George Seldes and I. F. Stone before him, he has bypassed conventionally minded newspapers and magazines, and with his remarkable website and in books like this, found a way of addressing readers directly about the issues central to our time. Again and again, he goes to the heart of the matter, drawing on his awesomely wide reading, his knowledge of history, and his acute political radar system that uncovers small but deeply revealing nuggets of news and often makes me feel, enviously: how could I have missed that?”

Tom Engelhardt created and runs the TomDispatch.com website, a project of the Nation Institute, where he is a fellow. He is the author of The American Way of War and The United States of Fear, both published by Haymarket Books, a highly praised history of American triumphalism in the cold war, The End of Victory Culture, and a novel, The Last Days of Publishing. Many of his TomDispatch interviews were collected in Mission Unaccomplished: TomDispatch Interviews with American Iconoclasts and Dissenters. With Nick Turse, he has written Terminator Planet: The First History of Drone Warfare, 2001-2050. He also edited The World According to TomDispatch: America in the New Age of Empire, a collection of pieces from his site that functions as an alternative history of the mad Bush years. TomDispatch is the sideline that ate his life. Before that he worked as an editor at Pacific News Service in the early 1970s, and, these last four decades as an editor in book publishing. For fifteen years, he was senior editor at Pantheon Books, where he edited and published award-winning works ranging from Art Spiegelman’s Maus and John Dower’s War Without Mercy to Eduardo Galeano’s Memory of Fire trilogy. He is now Consulting Editor at Metropolitan Books, as well as the cofounder and coeditor of Metropolitan’s the American Empire Project, where he has published bestselling works by Chalmers Johnson, Andrew Bacevich, Noam Chomsky, and Nick Turse, among others. Many of the authors whose books he has edited and published over the years now write for TomDispatch.com. For a number of years, he was also a Teaching Fellow at the Graduate School of Journalism at the University of California, Berkeley. He is married to Nancy J. Garrity, a therapist, and has two children, Maggie and Will, and a grandchild, Charlie.

Glenn Greenwald is a columnist on civil liberties and US national security issues for The Guardian (http://www.theguardian.com/profile/glenn-greenwald). A former constitutional lawyer, he was until 2012 a contributing writer at Salon. He is the author of How Would a Patriot Act?, a critique of the Bush administration’s use of executive power; A Tragic Legacy, which examines the George W. Bush presidency; and With Liberty and Justice For Some: How the Law Is Used to Destroy Equality and Protect the Powerful.