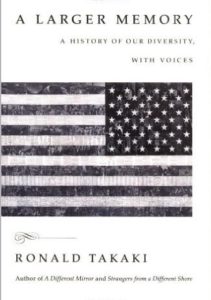 A LARGER MEMORY
A History of Our Diversity, with Voices

Acclaimed historian Ronald Takaki presents a fascinating and very human record of the American experience, as told by the diverst voices of the people who have lived it.

A Larger Memory brings together letters, diaries, and oral histories from Americans of a wide variety of backgrounds, from the eighteenth century to yesterday’s headlines. Ronald Takaki gathers the diverse voices of workers, shopkeepers, women, children, and others, and allows them to speak side by side, across ethnic borders.

The young slave Frederick Douglass tells how he learned to read; the fifteen-year-old Elizabeth Gurley Flynn, the daughter of Irish immigrants, gives her first speech at a labor rally; a Native American performs as an “Indian” in a Wild West show; Seattle high-schooler Monica Sone spends World War II in an internment camp for Japanese Americans; a Chinese teenager struggles with her father’s “old world” expectations; a Mexican immigrant gives up her dream of becoming a singer to provide a future for her son; a young African American man escapes from the inner city to Duke University through affirmative action.

Connected by Takaki’s sensitive historical narration, this multitidue of voices becomes a dynamic conversation about the lives and dreams of diverse Americans.

“Through this collection of essays, oral histories and primary source material, Takaki challenges what he describes as “the master narrative of American history, the ethnocentric story told from the perspective of the English colonists and their descendants” by illuminating the contributions that America’s numerous ethnic groups have made to the nation’s history. One of the country’s premier multiculturalist scholars, Takaki (A Different Mirror: A History of Multicultural America) eschews the angry, jargon-ridden ideological polemics that make up the usual artillery of the curriculum wars, opting instead to let America’s diverse peoples speak for themselves in excerpts that are both informative and moving. . . . Rather than balkanize America, scholarship of this caliber serves to bring Americans together in a greater appreciation of the diverse origins of our common heritage.”

“Takaki. . . has gathered a collection of first-person testimonies from a variety of sources. . . . The effect of these ‘voices,’ augmented by Takaki’s insightful commentaries, is not to inspire division or the building of psychological enclaves. Rather, it is to broaden the sense of our shared and wonderfully diverse heritage.”