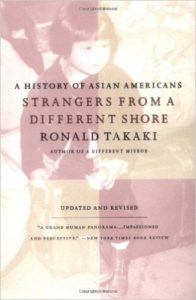 STRANGERS FROM A DIFFERENT SHORE
A History of Asian Americans

In an extraordinary blend of narrative history, personal recollection, and oral testimony, the author presents a sweeping history of Asian Americans. He writes of the Chinese who laid tracks for the transcontinental railroad, of plantation laborers in the canefields of Hawaii, of “picture brides” marrying strangers in the hope of becoming part of the American dream. He tells stories of Japanese Americans behind the barbed wire of U.S. internment camps during World War II, Hmong refugees tragically unable to adjust to Wisconsin’s alien climate and culture, and Asian American students stigmatized by the stereotype of the “model minority.” This is a powerful and moving work that will resonate for all Americans, who together make up a nation of immigrants from other shores.

“Takaki marshals an impressive array of details in his history of Asian Americans. . . . Personal passion shines through this scholarship.”

“Takaki, descended from a Japanese-American family who labored on Hawaiian plantations, and now an ethnic studies professor at UC Berkeley, has written a vibrant, rich history that gives back a voice to countless ‘invisible Americans.’ His broad, multi-ethnic survey is peopled with real individuals, allowing us to experience their loneliness, separation from families, struggles for survival.”

“This is fascinating reading, highly recommended.”