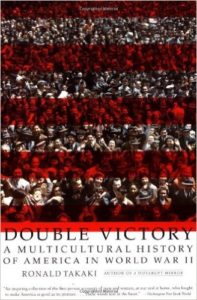 In this highly praised book, America’s preeminent multicultural historian scrutinies the contradictions of the “good war” and—through the stories and voices of ordinary, ethnically diverse Americans—reveals how World War II represented a “double victory” against fascism abroad and prejudice at home.”

“An inspiring collection of first-person accounts of men and women, at war and at home, who fought to make America as good as its promise. . . . These words tear at the heart.”

“Takaki delivers on his promise of an ‘eye-level view’ of the war, bringing to life the experiences and suffering of men and women whose stories have too often been overlooked in monochromatic histories of the ‘good war.’ Takaki’s swift account is rich in humanity and inclusiveness.”

“Double Victory reconsiders some of the war’s most troubling questions . . . . Takaki’s portraits of Roosevelt, having to be prodded into doing th right but politically risky thing and then doing it halfheartedly, and of President Harry S. Truman, his ‘buck-stops-here” facade hiding his genuine terror over the A-bombing, are convincingly nuanced.”

“The war against fascism, presumably for democracy, was tarnished by the racist treatment of Asians, Mexicans, and African Americans and by the official coldness in the face of the Jewish Holocaust. Takaki writes with undisguised passion, and lets us hear again and again the eloquent voices of those who fought the double fight, against the enemy abroad, for justice at home.”

Howard Zinn, author of A People’s History of the United States