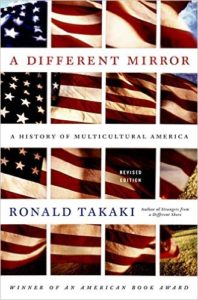 A DIFFERENT MIRROR
A History of Multicultural America

Winner of an American Book Award

Upon its first publication, A Different Mirror was hailed by critics and academics everywhere as a dramatic new retelling of our nation’s past. Beginning with the colonization of the New World, it recounted the history of America in the voice of the non-Anglo peoples of the United States—Native Americans, African Americans, Jews, Irish Americans, Asian Americans, Latinos, and others—groups who helped create this country’s rich mosaic culture.

Now, Ronald Takaki has revised his landmark work and made it even more relevant and important. Among the new additions to the book are:

This new edition of A Different Mirror is a remarkable achievement that grapples with the raw truth of American history and examines the ultimate question of what it means to be an American.

“In a vibrantly rich, moving multicultural tapestry, Takaki provides a fresh slant on American society by tracing the interwoven histories of Native Americans, Africans, Chinese, Japanese, Chicanos, Irish and Jewish immigrants. We see how 17th-century white planters, anxious to weaken an armed, politicized, white proletariat, enslaved an unarmed black workforce, with explosive consequences. We follow Chicano struggles as an integral part of America’s westward expansion and learn how Jewish-black solidarity extends back to John Brown’s uprising in 1856 against slavery in Kansas, an insurrection in which Jews participated. We see how oppression of the Irish (the first people the English called “savages”) foreshadowed the subjugation of Native Americans. Interweaving voices from all points on the ethnic rainbow, Takaki, ethnic studies professor at UC Berkeley, has produced a brilliant revisionist history of America that is likely to become a classic of multicultural studies.”