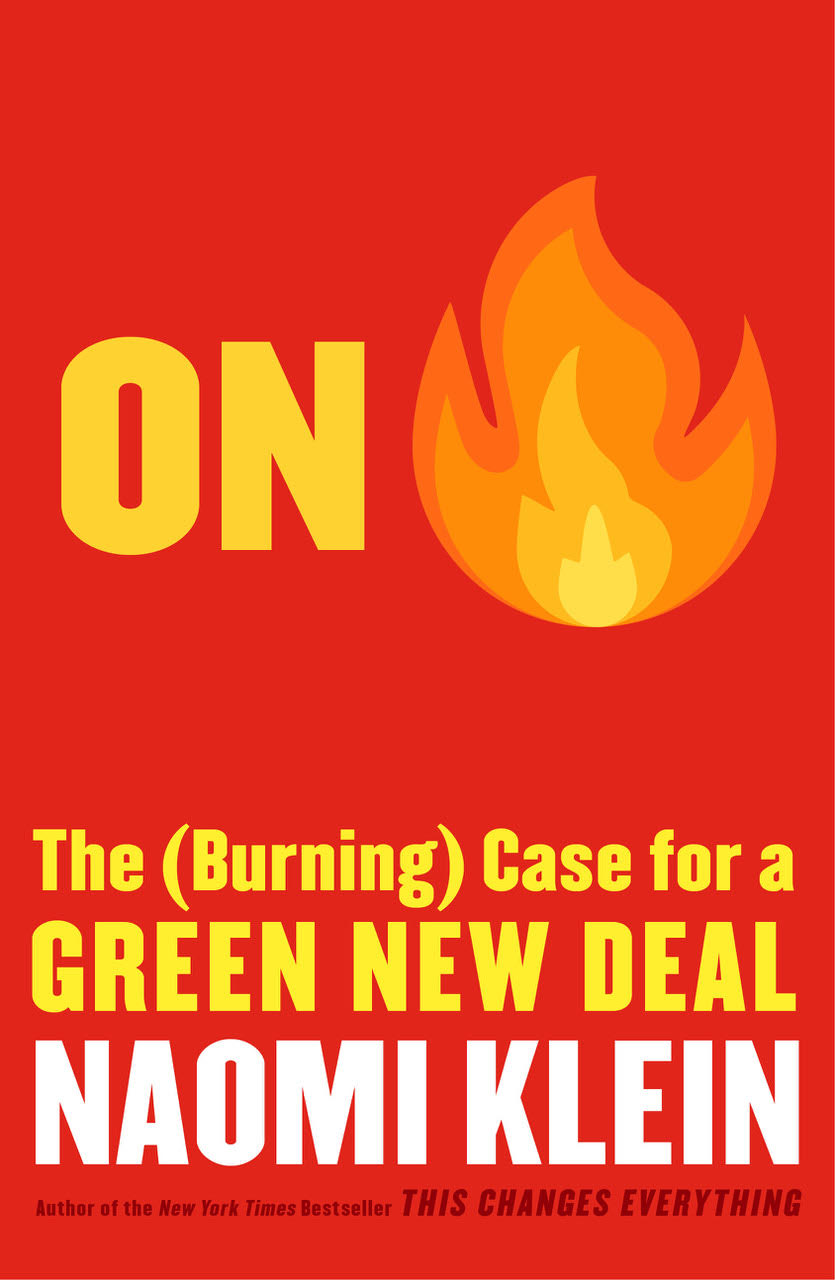 ON FIRE
The (Burning) Case for a Green New Deal

Twenty years after No Logo, and five years after This Changes Everything, On Fire explains how the bold ideas and action within the Green New Deal could avert climate catastrophe and be a blueprint for a just and thriving society.

Naomi Klein’s seventh book, On Fire: The Burning Case for a Green New Deal gathers for the first time Naomi’s impassioned reporting from the frontlines of climate breakdown, and pairs it with new material on the high stakes of what we choose to do next.

Published in hardcover in the US, UK and Canada in 2019, it was an instant New York Times bestseller and was serialized in The Guardian UK and in the Covering Climate Now news syndicate worldwide. Naomi completed a multi-country book in 2019/early 2020.  The paperback was released in 2020 with a new foreword written during the Covid-19 Pandemic.

Jane Fonda said, “I didn’t know this [book] would change my life.  It told me what I had to do, and it motivated me to do it.”

Watch the Emmy nominated viral video “Message from the Future” produced by Naomi about the Green New Deal, co-written and narrated by Rep. Alexandria Ocasio-Cortez.

For more than a decade, Naomi Klein has documented the movement of the climate crisis from future threat to a burning emergency.  She has been among the first to make the case for what is now called the Green New Deal – a vision for transforming our economies to battle climate breakdown and rampant inequality at the same time. In our era of rising seas and rising hate, she argues that only this kind of bold, roots-up action has a chance of rousing us to fight for our lives while there is still time.

On Fire’s long-form essays, based on her extensive research and reporting, show Klein at her most prophetic and philosophical, investigating the climate crisis not only as a profound political challenge but as a spiritual and imaginative one as well. Delving into the clash between ecological time and our culture of “perpetual now”; the soaring history of rapid human change in the face of grave threats; rising white supremacy and fortressed borders as a form of “climate barbarism” and more, this is a rousing call to transformation – and a dire warning about what awaits if we fail to act.

With dispatches from the ghostly Great Barrier Reef to the smoke-choked skies of the Pacific Northwest, to post-hurricane Puerto Rico, to a Vatican waking up to the case for radical change, recognizing that we will rise to the existential challenge of climate change only if we are willing to transform the systems that produced this crisis — On Fire captures the burning urgency of the climate crisis, as well as the fiery energy of a global movement demanding a catalytic Green New Deal.

“If I were a rich man, I’d buy 245 million copies of Naomi Klein’s On Fire and hand-deliver them to every eligible voter in America…because it makes a strong case for tackling the climate crisis as not just an urgent undertaking, but an inspiring one.”

“It’s an urgent book that never surrenders hope, committed to the idea that we can act and insistent that we must. Klein’s message could not be more timely, because the time for action is now.”

.”..she sets out her argument with a precision that matches her passion….This is a scorching volume for a heated time. The fire next time, it turns out, is now.”

“Naomi Klein’s work has always moved and guided me. She is the great chronicler of our age of climate emergency, an inspirer of generations.”

“A critically important thought-leader in these perilous times, a necessary voice as a courageous movement of movements rises from the ashes.”

“Naomi is like a great doctor—she can diagnose problems nobody else sees.”

“Naomi Klein applies her fine, fierce and meticulous mind to the greatest, most urgent questions of our times. . . . I count her among the most inspirational political thinkers in the world today.”

“Naomi Klein is a precious gift: every time I read her words, my heart leaps from sadness and anger to action. She takes us deep, down to the roots of what is wrong—and then up, up to a height from which we can see what must be done. Everything we love is at stake now: these writings are our best and brightest hope.”

“The greatest theorist of climate change.”

“Masterful. . .What separates Klein from many other advocates for a Green New Deal is her balanced combination of idealism and politics-based realism. . .Another important addition to the literature on the most essential issue of our day.”

Klein’s passion for action reflects the political, social, and scientific gridlock that makes such sweeping, transformational legislation imperative. Her zeal and eloquence will inspire, engage, and motivate those who are concerned about the planet’s future to become even more involved in taking any and all possible steps to curb or reverse further disruption and destruction.”

“For a quarter century, now, Naomi Klein has been an outspoken and fearless voice on that which late-stage hyper-capitalism has wrought upon the world: income inequality, overreaching corporate power, for-profit empire building and, of course, the consequent climate crisis. Honestly, we don’t deserve her, and looking back at her seven books one can’t help but think of Cassandra, her warnings ever accurate yet unheeded… with her eighth book, On Fire, Klein collects her longform writing on the climate crisis—from the dying Great Barrier Reef to hurricane-ravaged Puerto Rico—and somehow manages to strike a hopeful note as she calls for a radical commitment to the Green New Deal, the kind of collective mobilization that saved us from the brink in WWII, and might be our only hope now.”

How to Change Everything: A Handbook for Young Climate and Justice Warriors  (with Rebecca Stefoff)

No Is Not Enough: Resisting Trump’s Shock Politics and Winning the World We Need

The Battle For Paradise: Puerto Rico Takes on the Disaster Capitalists

Naomi Klein is an award-winning journalist, columnist, and author of the New York Times and international bestsellers The Shock Doctrine, No Logo, This Changes Everything, No Is Not Enough, and On Fire. A Senior Correspondent for The Intercept, reporter for Rolling Stone, and contributor for both The Nation and The Guardian, Klein is a member of faculty at the University of British Columbia’s Department of Geography and the inaugural Faculty of Arts Chair in Climate Justice at the Centre for Climate Justice. She is co-founder of the climate justice organization The Leap. Her books have been translated into more than thirty languages. Her most recent book, with Rebecca Stefoff, is How to Change Everything: A Young Human’s Guide to Protecting the Planet and Each Other.