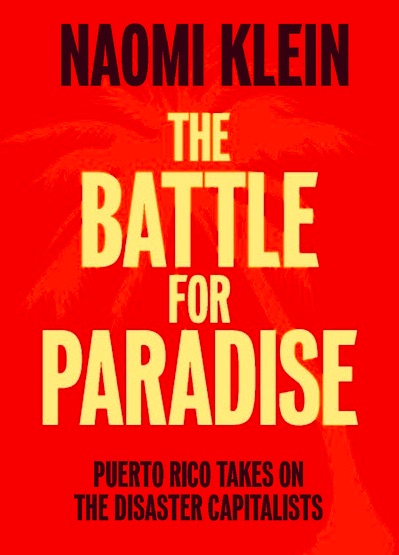 THE BATTLE FOR PARADISE
Puerto Rico Takes on the Disaster Capitalists

In the rubble of Hurricane Maria, Puerto Ricans and ultrarich “Puertopians” are locked in a pitched struggle over how to remake the island. In this vital and startling investigation, bestselling author and activist Naomi Klein uncovers how the forces of shock politics and disaster capitalism seek to undermine the nation’s radical, resilient vision for a “just recovery.”

All royalties from the sale of this book in English and Spanish go directly to JunteGente, a gathering of Puerto Rican organizations resisting disaster capitalism and advancing a fair and healthy recovery for their island. For more information, visit http://juntegente.org/.

“We are in a fight for our lives. Hurricanes Irma and María unmasked the colonialism we face in Puerto Rico, and the inequality it fosters, creating a fierce humanitarian crisis. Now we must find a path forward to equality and sustainability, a path driven by communities, not investors. And this book explains, with careful and unbiased reporting, only the efforts of our community activists can answer the paramount question: What type of society do we want to become and who is Puerto Rico for?”

“Naomi Klein concisely reveals to us what Puerto Rico has faced, shock after shock, before Hurricane Maria and after it and also the voices of people who believe and build a future for Puerto Rico from the strength of their communities.”

“Like so many of my generation, I’ve been a reader of Naomi Klein’s since the late 90s, always finding something to learn from her rigorous reporting and thoughtful analysis. There’s no-one better to tell the story of Hurricane Maria and its global significance than Naomi. In the face of speculation, exploitation and climate crisis, this book calls on us to recognize Puerto Rico’s struggle for democracy, justice, and human life itself, as our own.”

“What ‘shocks’ in this work is the resilient spirit del pueblo boricuá. They become the metaphor, the meaning and the maker of possiblity.  And one is left immeasurably hopeful.”

“A gripping and timely account of  classic ‘shock doctrine’ being perpetrated in Puerto Rico. Naomi Klein chronicles the extraordinary grassroots resistance  by the Puerto Rican people against neoliberal privatization and Wall Street greed in the aftermath of the island’s financial meltdown, of hurricane devastation, and of Washington’s imposition of an outside control board over the most important U.S. colony.”

Juan González, co-host of Democracy Now! and author of Harvest of Empire: A History of Latinos in America.

“Against the rampant greed of disaster capitalism, only radical solidarity can provide the way forward for Puerto Rico. To build it, our approach must be grounded in uncovering and combating the strategies that have been developed to deprive an entire nation of its human rights and its ability to defend itself. Klein’s work does precisely this, inspiring a unified vision to create the Puerto Rico we need.”

No Is Not Enough: Resisting Trump’s Shock Politics and Winning the World We Need

On Fire: The (Burning) Case for a Green New Deal

Naomi Klein is an award-winning journalist, columnist, and author of the New York Times and international bestsellers The Shock Doctrine, No Logo, This Changes Everything, No Is Not Enough, and On Fire. A Senior Correspondent for The Intercept, reporter for Rolling Stone, and contributor for both The Nation and The Guardian, Klein is a member of faculty at the University of British Columbia’s Department of Geography and the inaugural Faculty of Arts Chair in Climate Justice at the Centre for Climate Justice. She is co-founder of the climate justice organization The Leap. Her books have been translated into more than thirty languages. Her most recent book, with Rebecca Stefoff, is How to Change Everything: A Young Human’s Guide to Protecting the Planet and Each Other.