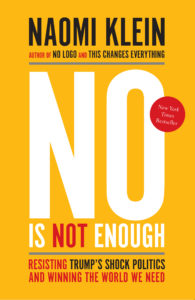 NO IS NOT ENOUGH:
Resisting Trump’s Shock Politics and Winning the World We Need

“This is one attempt to uncover how we got to this surreal political moment. It is also an attempt to predict how, under cover of shocks and crises, it could get a lot worse. And it’s a plan for how, if we keep our heads, we might just be able to ip the script and arrive at a radically better future.”
– Naomi Klein, from the introduction

Donald Trump’s takeover of the White House is a dangerous escalation in a world of cascading crises. His reckless agenda—including a corporate coup in government, aggressive scapegoating and warmongering, and sweeping aside climate science to set off a fossil fuel frenzy—will generate waves of disasters and shocks to the economy, national security, and the environment.

Acclaimed journalist, activist, and bestselling author Naomi Klein has spent two decades studying political shocks, climate change, and “brand bullies.” From this unique perspective, she argues that Trump is not an aberration but a logical extension of the worst, most dangerous trends of the past half-century—the very conditions that have unleashed a rising tide of white nationalism the world over. It is not enough, she tells us, to merely resist, to say “no.” Our historical moment demands more: a credible and inspiring “yes,” a roadmap to reclaiming the populist ground from those who would divide us—one that sets a bold course for winning the fair and caring world we want and need.

This timely, urgent book from one of our most influential thinkers offers a bracing positive shock of its own, helping us understand just how we got here, and how we can, collectively, come together and heal.

“In No Is Not Enough, Naomi Klein anatomizes the roots of Trump in the already dystopian world of corporate-ruled America and predicts the ]’end run around democracy”. A clear and readable guide to action, if it is action you are contemplating.”

“The desire to radically challenge capitalism is widespread and growing. Klein’s new book is an important contribution to that project.”

“An ordinary person’s guide to hope. Read this book.”

“A genuine page-turner—highly engaging and provocative.”

“Naomi Klein is one of the few revolutionary public intellectuals of great integrity and vision.”

Bill McKibben, author, Oil and Honey: The Education of an Unlikely Activist

“Incites us brilliantly to stiffen our lip, to overcome . . . and to interweave our No with a programmatic Yes.”

“Who better than Naomi to make sense of this madness, and help us find a way out? This book is a top-of-the-stack summer must-read.”

“An urgent intervention . . . a critical contribution to the developing opposition to Trump and the economic disorder that produced him.”

“A compelling book we all need to read and act on . . . an essential handbook for all people, especially young people.”

“[A] brilliant and layered analysis applied with lightning precision, and a compelling vision of the Yes to come.”

“Naomi Klein constructs a common story that allows us to withstand the effects of being shocked. We can act upon that, with intelligence and happiness, to recover our world and the use of adjectives.”

“Ceaselessly illuminating, daring, and indispensable. As accessible as it is brilliant . . . essential.”

Owen Jones, author, The Establishment: And How They Get Away with It

“Klein is an essential voice for our time. No is Not Enough is her reaction to the Trump presidency and her cry to oppose it. Drawing on her own personal experiences, Klein encourages resistance, not just refusal. An intense, probing analysis that asks how we got here, and now what?”

Rough Trade, Books of the Year

How to Change Everything: A Handbook for Young Climate and Justice Warriors  (with Rebecca Stefoff)

On Fire: The (Burning) Case for a Green New Deal

The Battle For Paradise: Puerto Rico Takes on the Disaster Capitalists

Naomi Klein is an award-winning journalist, syndicated columnist, documentary filmmaker and author of the international bestsellers No Logo: Taking Aim at the Brand Bullies, The Shock Doctrine: The Rise of Disaster Capitalism and This Changes Everything: Capitalism vs. the Climate. Klein holds the Gloria Steinem Endowed Chair in Media, Culture and Feminist Studies at Rutgers University.

She is Senior Correspondent for The Intercept, and contributor to the Nation Magazine.  She is also a Puffin Foundation Writing Fellow at The Nation Institute and her writing appears widely in such publications as The New York Times, Le Monde, The Guardian. Klein is a member of the board of directors for climate-action group 350.org and one of the organizers behind Canada’s Leap Manifesto, a blueprint for a rapid and justice-based transition off fossil fuels. . In November 2016 she was awarded Australia’s prestigious Sydney Peace Prize for, according to the prize jury, “inspiring us to stand up locally, nationally and internationally to demand a new agenda for sharing the planet that respects human rights and equality.”

Her books have been translated into more than thirty languages. Visit: www.naomiklein.org/