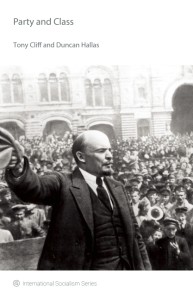 Party and Class dispels the myths about “democratic centralism” and demonstrate that the kind of socialist party that Lenin built had nothing in common with the Stalinist despotism that replaced it.

Tony Cliff was a lifelong organizer within the international socialist movement. His groundbreaking work established the unique interpretation of the Soviet Union as a bureaucratic, state-centered version of capitalism, rather than a workers’ state. His many works include State Capitalism in Russia and the volume that follows-up from this book, All Power to the Soviets, about Lenin’s political leadership from 1914 to 1917.

Trotsky’s Marxism and Other Essays