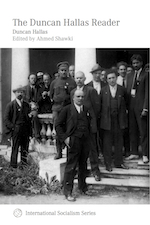 Duncan Hallas was a tireless activist, teacher and revolutionary. He not only wrote about the class struggle, but also led that movement in his life. This volume collects his writings and speeches, but also includes transcripts of some of his best speeches and additional material such as an interview about his role in leading revolt in the British army.

Trotsky’s Marxism and Other Essays