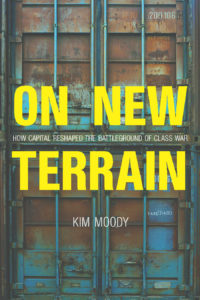 ON NEW TERRAIN
How Capital Reshaped the Battleground of Class War

Shortlisted for the 2018 Deutscher Memorial Prize

An insightful and timely analysis of how global economic restructuring will impact workers’ struggles in the U.S.

Activist, scholar, and labor journalist Kim Moody analyzes how changes in global capitalism have altered both the composition of the working class and the economic and political ground on which it struggles. From the logistics revolution to the unprecedented concentration of business and wealth in the hands a shrinking few, Moody examines the impact of this new economic terrain on potential working class resistance movements.

“The best recent work on the history and the contemporary promise of the move from Ford to Tesco is Kim Moody’s On New Terrain: How Capital is Reshaping the Battleground of Class War.”

“On New Terrain makes a convincing case for revolutionary politics, not on the basis of hope and conjecture, but concrete evidence and history. Read this book, discuss it with others and follow through on its conclusions.”

“This is a detailed and provocative study of how capital has changed since the 1980s and its effects on the working class and political parties in the USA and across the world.”

“Despite the election of Trump and the rise of the alt-right, the huge support for Bernie Sanders’ campaign for the 2016 Democratic Presidential nomination, the Black Lives Matter movement and the wave of teachers’ strikes show that there is plenty of anger among US workers. Moody’s welcome and important book shows that they still have the power to resist and how socialists can build a mass movement of opposition to neoliberalism in its heartland.”

In Solidarity: Essays on Working-Class Organization and Strategy in the United States

Kim Moody was a founder of Labor Notes and author of several books on the U.S. labor movement, including In Solidarity: Essays on Working-Class Organization in the United States (Haymarket Books, 2014) and U.S. Labor in Trouble and Transition (Verso, 2007). He has a PhD from the University of Nottingham.