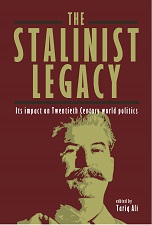 Edited and with a new introduction by Tariq Ali

Tariq Ali, Isaac Deutscher, Ernest Mandel, and others analyze the nature of Stalinism, and its continuing impact on world politics. Marx once wrote that “history weighs like a nightmare on the brain of the living,” and even twenty years after the Soviet Union’s collapse activists are still confronted by the legacy of Stalinism.

Was the Russian Revolution doomed to failure? Did the Bolsheviks, by daring to challenge both Tsarist absolutism and capitalism inevitably reap a century of mass slaughter and continued oppression in the name of liberation? Political commentators and historians alike have all but reduced the revolution to the sum total of Stalin’s gulags, secret police, and the anti-semitism which attended its decline. And today, even twenty years after the Soviet Union’s collapse, activists the world over are forced to confront this ghastly legacy whenever they too dare to struggle for a more just society.

This volume aims to deepen our understanding of the origins, impacts, and enduring prominence of Stalinism, so as to help exorcise these ghosts of the past and reclaim the hopes for a better tomorrow they have conspired to steal.

“The charm of stylish dissent: less Chomsky, more poetry. Empires may come and go but Tariq Ali, the rebel who has lost the streets but gained the ghettos, is here to stay, to fight on. … Buy his spirit.”

“Ali … remains an outlier and intellectual bomb-thrower in his adopted London; an urbane, Oxford-educated polemicist.”

Tariq Ali is a writer and filmmaker. He has written more than two dozen books on world history and politics, and seven novels (translated into over a dozen languages) as well as scripts for the stage and screen. He is an editor of New Left Review and lives in London. His website is http://tariqali.org/.

Other books by Tariq Ali:

Speaking of Empire and Resistance: Conversations with Tariq Ali

Speaking of Empire and Resistance: Conversations with Tariq Ali