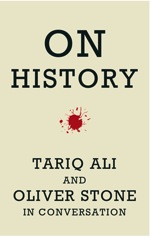 ON HISTORY
Tariq Ali and Oliver Stone in Conversation

By Tariq Ali and Oliver Stone

In working together on two challenging new documentaries – South of the Border and the forthcoming Untold History of the United States series for Showtime – filmmaker Oliver Stone engaged with author and filmmaker Tariq Ali in a probing, hard-hitting conversation on the politics of history.

Their dialogue brings to light a number of forgotten – or deliberately buried – episodes of American history, from the U.S. intervention against the Russian Revolution and the dynamic radicalism of the Industrial Workers of the World to Henry Wallace’s sidelining by Democratic Party machine insiders and the ongoing interference of the United States in Pakistani political affairs.

For Stone and Ali – two of our most insightful observers on history and popular culture – no topic is sacred, no orthodoxy goes unchallenged.

“Oliver Stone and Tariq Ali, two of our most provocative and radical voices, engage in a thought-provoking conversation about history – ripping apart entrenched establishment narratives which have suppressed the alternative visions we desperately need for our radical social movements and a true participatory democracy.”

“Oliver Stone asks smart questions about the rise and fall of the United States and its empire in the twentieth century, and Tariq Ali provides smart answers. The result is a provocative book that is sure to incite controversy and stimulate debate.”

Jon Wiener, professor of history, University of California at Irvine

Tariq Ali is an internationally acclaimed Pakistani writer and filmmaker. He has written more than two dozen books on world history and politics and seven novels (translated into over a dozen languages) as well as scripts for the stage and screen. He is an editor of New Left Review and lives in London.