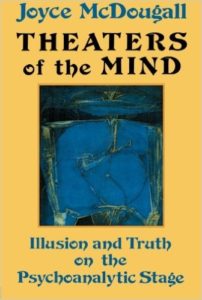 THEATERS OF THE MIND
Illusion and Truth on the Psychoanalytic Stage

Praise from the New York Times:

“All of us harbor a secret theater of the mind with a favorite scenario that we repeat in fantasy as well as in life, according to Joyce McDougall, a psychoanalyst in Paris.

“These psychic scenarios, Dr. McDougall says, take their scripts from the calamities of childhood—for example, the discovery that one’s parents are sexual or the reaction to the birth of a sibling. Dr. McDougall writes that the inevitable frustrations surrounding such experiences lead to a life drama whose plot reveals itself to be repetitive. She draws on her own cases to show how people can recruit mates who enact the roles their inner scripts dictate. The case material sometimes reads like a subplot from “Dynasty”: one patient, who yearned for a mother-substitute, managed to find and marry an older woman who craved a younger man for her lover, because—in Dr. McDougall’s analysis—she actually was attracted to the young man’s mother. Dr. McDougall’s psychoanalytic outlook shares much with that of Melanie Klein, and her remarkable use of language suggests uniquely French sensibility. She covers familiar terrain—from neurosis to narcissism, perversion to psychosis—in a fresh way, avoiding the often turgid jargon of psychoanalysis. Dr. McDougall’s simple and direct style recommends her book not just to the specialist but to anyone fascinated by the primitive dramas that drive us all.”

Joyce McDougall was an internationally renowned psychoanalyst, who made original theoretical and clinical contributions to understanding sexuality, perversions, psychosomatic symptoms, addictions, and creativity. As The Guardian wrote upon her death, “Her clinical insights, theoretical originality, open-mindedness and lack of dogmatism made her unique throughout her 60-year career and enabled her to create a valuable link connecting the Anglo-Saxon and French psychoanalytical schools.” McDougall was a supervising and training analyst at the Paris Psychoanalytic School, and was an honorary member off the Association for Psychosomatic Medicine in New York, the New York Freudian Society, and teacher at the Object Relations Institute of New York. Her many books, including the landmark Theaters of the Body, were translated into 10 languages. McDougall died in 2011.

The Many Faces of Eros

Theaters of the Body