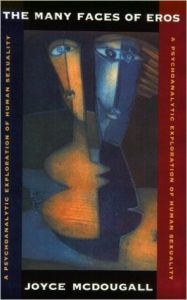 THE MANY FACES OF EROS
A Psychoanalytic Exploration of Human Sexuality

‘Human sexuality is inherently traumatic,’ begins this fascinating study by one of the world’s most distinguished writers in this field. Joyce McDougall convincingly demonstrates that the psychic conflicts arising from the tensions between the inner world of primitive instinctual drives and the constraining and denying forces of the external world begin in earliest infancy and have ramifications throughout life.

“A mature, considered presentation of [McDougall’s] current thinking on sexuality . . . simultaneously impassioned and dispassionate, erudite and plain-spoken, conservative in her insistence on basic psychoanalytic assumptions and radical in her celebration of intimate human diversity.”

“‘Human sexuality is inherently traumatic,’ begins The Many Faces of Eros (1996). As McDougall demonstrated convincingly, the psychic conflicts arising from the tensions between the inner world of primitive drives and the constraining and denying forces of the external world begin in earliest infancy, but have ramifications throughout life.”

Theaters of the Body

Theaters of the Mind

Joyce McDougall was an internationally renowned psychoanalyst, who made original theoretical and clinical contributions to understanding sexuality, perversions, psychosomatic symptoms, addictions, and creativity. As The Guardian wrote upon her death, “Her clinical insights, theoretical originality, open-mindedness and lack of dogmatism made her unique throughout her 60-year career and enabled her to create a valuable link connecting the Anglo-Saxon and French psychoanalytical schools.” McDougall was a supervising and training analyst at the Paris Psychoanalytic School, and was an honorary member off the Association for Psychosomatic Medicine in New York, the New York Freudian Society, and teacher at the Object Relations Institute of New York. Her many books, including the landmark Theaters of the Body, were translated into 10 languages. McDougall died in 2011.