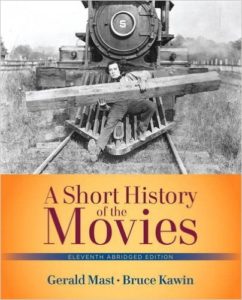 A SHORT HISTORY OF THE MOVIES (Abridged)

This is the essential core of Mast and Kawin’s classic in a streamlined volume: the most accurate, carefully updated account of cinema today in a clear and lively text.

Building on Mast’s astute and lively history of cinema, Kawin has refined and updated the fascinating story of cinema’s evolution from its earliest beginnings to the digital age. Probing deeper than most movie texts, he takes us into the studio vaults, corrects the record, discloses what goes on inside the industry, clarifies the mysteries of movie technology, and offers a precise, thoroughly researched account. Kawin’s analysis is witty and engaging, rich in instructive insights and entertaining illustrations of the art, history, technology, business, and fun of film. Now the essentials of Mast and Kawin’s classic text are available in a compact version, judiciously streamlined for today’s student at an even trimmer price.

Bruce Kawin is the author of film criticism, film history, literary theory, and poetry, and was a professor at the University of Colorado-Boulder from 1975 to 2015 in the English Department and Film Studies Program. He received an AB in English and Comparative Literature from Columbia (1967), an MFA in Creative Writing and Filmmaking from Cornell (1969), and a PhD in Modern British and American Literature and Film Aesthetics from Cornell (1970). His many books include Telling It Again and Again, Mindscreen, The Mind of the Novel, Horror and the Horror Film, and two books of poetry.

OTHER BOOKS BY THESE AUTHORS:

A Short History of the Movies, Eleventh Edition

The Comic Mind: Comedy and the Movies