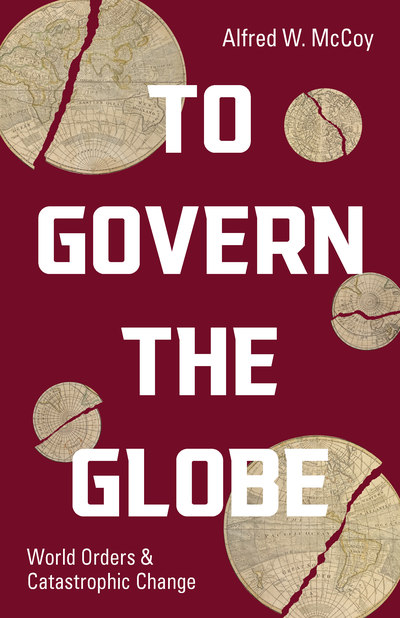 TO GOVERN THE GLOBE
World Orders and Catastrophic Change

In a sweep through seven centuries from 1350 to 2050, the work explains how catastrophes– pandemics, wars, and climate crisis–have shaped the destiny of empires and world orders.

In a tempestuous narrative that sweeps across five continents and seven centuries, this book explains how a succession of catastrophes—from the devastating Black Death of 1350 through the coming climate crisis of 2050—has produced a relentless succession of rising empires and fading world orders.

During the long centuries of Iberian and British imperial rule, the quest for new forms of energy led to the development of the colonial sugar plantation as a uniquely profitable kind of commerce. In a time when issues of race and social justice have arisen with pressing urgency, the book explains how the plantation’s extraordinary profitability relied on a production system that literally worked the slaves to death, creating an insatiable appetite for new captives that made the African slave trade a central feature of modern capitalism for over four centuries.

After surveying past centuries roiled by imperial wars, national revolutions, and the struggle for human rights, the closing chapters use those hard-won insights to peer through the present and into the future. By rendering often-opaque environmental science in lucid prose, the book explains how climate change and changing world orders will shape the life opportunities for younger generations, born at the start of this century, during the coming decades that will serve as the signposts of their lives—2030, 2050, 2070, and beyond.

McCoy is one of the most eminent scholars in the world on the abuse of power and authority, on surveillance and repression, on the historical evolution of state-sanctioned torture in the US and elsewhere, and, more recently, on the rapidly declining state of the US empire…McCoy’s latest book To Govern the Globe is a formidable work of scholarship spanning an incredible arc of world history. Yet it is a gripping and fast-paced read that manages to distill the complex history of the rise and fall of world empires into a gripping narrative that is simultaneously exhilarating and terrifying. The book’s scope is so massive that only a scholar of McCoy’s skill could even consider attempting to capture it. McCoy’s meticulous understanding of the past and present failures and excesses of empires gives him the rare credibility to offer a detailed, damning picture of the grim realities humankind faces as history transforms into our future. After reading To Govern the Globe, however, I must conclude that embedded within McCoy’s book is a ray of hope demanding to be seen by us all before it’s truly too late.”

“To Govern the Globe is history on an epic scale—sweeping, provocative, and unsparing in its judgments.  Alfred McCoy’s immensely readable narrative spans centuries, charting the rise and fall of successive world orders down to our own present moment shaped by China’s emergence as a great power and the blight of climate change.”

Andrew Bacevich, author of After the Apocalypse:  America’s Role in a World Transformed

In the Shadows of the American Century: The Rise and Decline of US Global Power

Alfred McCoy holds the Harrington Chair in History at the University of Wisconsin-Madison. His 2009 book Policing America’s Empire won the Kahin Prize from the Association for Asian Studies. In 2012, Yale University awarded him the Wilbur Cross Medal for work as “one of the world’s leading historians of Southeast Asia and an expert on…international political surveillance.”