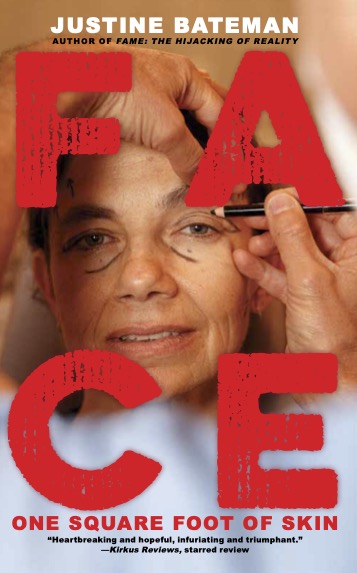 FACE:
One Square Foot of Skin

Writer/director/producer Justine Bateman examines the aggressive ways that society reacts to the aging of women’s faces.

Face: One Square Foot of Skin is a book of fictional vignettes that examines the fear and vestigial evolutionary habits that have caused women and men to cultivate the imagined reality that older women’s faces are unattractive, undesirable, and something to be “fixed.”

Based on “older face” experiences of the author, Justine Bateman, and those of dozens of women and men she interviewed, the book presents the reader with the many root causes for society’s often negative attitudes toward women’s older faces. In doing so, Bateman rejects those ingrained assumptions about the necessity of fixing older women’s faces, suggesting that we move on from judging a woman’s worth based on the condition of her face.

With impassioned prose and a laser-sharp eye, Bateman argues that a woman’s confidence should grow as she ages, not be destroyed by society’s misled attitude about that one square foot of skin.

Listen to an interview with Justine Bateman at the Megyn Kelly Show.

“In her superb new book, Face: One Square Foot of Skin, Bateman invites us to intimately explore the fears that lead women to alter their faces to erase the signs of aging.”

“Face…is filled with fictional vignettes that examine real-life societal attitudes and internal fears that have caused a negative perspective on women’s faces as they age.”

“There is nothing wrong with your face. At least, that’s what Justine Bateman wants you to realize. Her new book, Face: One Square Foot of Skin, is a collection of fictional short stories told from the perspectives of women of all ages and professions; with it, she aims to correct the popular idea that you need to stop what you’re doing and start staving off any signs of aging in the face.”

“The actor and author of Face: One Square Foot of Skin wants to push back against the ubiquity of plastic surgery.”

“Bateman asks, what if we just rejected the idea that older faces need fixing. What if we ignored all the clanging bells that remind women every day on every platform that we are in some kind of endless battle with aging.”

“In Fame, Bateman deconstructed the flimsy edifice of celebrity. In this equally fiery and potent follow-up, she does the same for our notions of what constitutes a beautiful face . . . Combining the author’s intensely personal stories with relevant examples from the culture at large, the book is heartbreaking and hopeful, infuriating and triumphant.”

“Both protest and paean, Bateman’s chronicle advocates for a power shift away from buying into the incessant selling of cosmetic perfection and toward the recognition that a woman’s unaltered face is a record of earned intelligence, wisdom, and confidence. Bateman issues a call to invert the age-old paradigm, stop stoking shame about signs of growing older, and name the ultimate accessory that is powerfully individual to each woman, an aging face that has faced life.”

“Justine Bateman extends her creative talents to include fiction in this collection of vignettes that focus on how we’ve learned to react to women’s faces as they age. Based on Bateman’s own real-life interviews, the stories dig deep to uncover why we’re uncomfortable with faces of a certain age, and argue that confidence—and not cosmetic procedures—are the answer to the problem.”

“Through a selection of short stories, [Bateman] examines just how complicated it is for women to get older, both in and out of the spotlight.”

“Face: One Square Foot of Skin [is] a creative nonfiction tome about the ways society responds to women as they age . . . [Bateman] said she was compelled to take a deeper look at the unfair expectations placed on women, particularly women in the public eye like her, as they grow older.”

“[Bateman] recounts her own experiences and interviews more than 20 other individuals to present a series of fictional vignettes that argue that women’s aging faces should be viewed as beautiful—the proof of complex lives well lived.”

“Totally enthralling and wholly engrossing from start to finish.”

“[Bateman] argues that American society has long equated the signs of aging on a woman’s face with unattractiveness. But she also asserts that women need not participate in such prejudice by accepting and internalizing it.”

“I can’t think of anyone better than Justine Bateman to start the conversation about how we’ve devolved into a society that doesn’t allow women to age. Brave, brilliant, and unflinchingly honest, Justine is that writer you trust because she goes after every subject with a warrior’s focus, and throws herself to the lions while she’s at it. It doesn’t hurt that she’s a gorgeous woman who hasn’t tried to erase an ounce of history from her face. I love the way she thinks, and am amazed at the many sublayers she manages to excavate while everyone else is scratching the surface.”

“These honest, no-flinch stories about womanhood, beauty, and meaning will make you mad, break your heart, will have you longing for a better world, have you rooting for her, yourself, for all women. And you will stand up and cheer when Bateman slides into home plate with an ending of grace and revelation. Riveting read! Profound glimpses into the soul of our society.”

Critical praise for Fame: The Hijacking of Reality by Justine Bateman:

“Justine Bateman was famous before selfies replaced autographs, and bags of fan mail gave way to Twitter shitstorms. And here’s the good news: she took notes along the way. Justine steps through the looking glass of her own celebrity, shatters it, and pieces together, beyond the shards and splinters, a reflection of her true self. The transformation is breathtaking. Revelatory and raucous, fascinating and frightening, Fame is a hell of a ride.”

Michael J. Fox, actor, author of A Funny Thing Happened on the Way to the Future

“In a new book, Fame: The Hijacking of Reality, the two-time Emmy nominee takes a raw look at the culture of celebrity, reflecting on her stardom at its dizzying peak–and the ‘disconcerting’ feeling as it began to fade.”

“As the title Fame: The Hijacking of Reality more than implies, this is a book about the complicated aspects of all things fame.”

“Bateman digs into the out-of-control nature of being famous, its psychological aftermath and why we all can’t get enough of it.”

“The Family Ties alum has written the rawest, bleakest book on fame you’re ever likely to read. Bateman’s close-up of the celeb experience features vivid encounters with misogyny, painful meditations on aging in Hollywood, and no shortage of theses on social media’s wrath.”

“Bateman addresses the reader directly, pouring out her thoughts in a rapid-fire, conversational style. (Hunter S. Thompson is saluted in the acknowledgments.)…But her jittery delivery suits the material–the manic sugar high of celebrity and its inevitable crash. Bateman takes the reader through her entire fame cycle, from TV megastar, whose first movie role was alongside Julia Roberts, to her quieter life today as a filmmaker. She is as relentless with herself as she is with others.”

“While Bateman’s new book Fame: The Hijacking of Reality (out now) touches on the former teen starlet’s experience in the public eye, it’s not a memoir. Far from it, in fact–it’s instead an intense meditation on the nature of fame, and a glimpse into the repercussions it has on both the individual experiencing it and the society that keeps the concept alive.”

“Bateman takes an unsentimental look at the nature of celebrity worship in her first book, Fame: The Hijacking of Reality.”

“In Justine Bateman’s Fame, a deeply personal book about the Family Ties actor’s experience in the limelight, she reminds us that famous people are exactly that: people.”

“You’ve never read anything quite like this book–don’t call it a memoir–by the actress/director/producer best known for her role on the ’80s sitcom Family Ties. It’s a meditation on fame (if something so raw and full of expletives can be called a meditation), examining what it does to celebrities–and the rest of us.”

“Now, nearly 30 years after Family Ties went off the air, Bateman is examining the ins and outs of stardom in her new book, Fame: The Hijacking of Reality. In it, she looks at the internal reality-shift of the famous and explores theories on the public’s behavior at each stage of a celebrity’s career. She also gets candid about her own ups and downs with stardom.”

“What is fame? In 2018, Justine Bateman wrote a book about it. The title of her book is Fame: The Hijacking of Reality. In it, Bateman…writes about the experience of becoming extremely famous (and gradually becoming much less famous) and what it was like from the inside…Fame is a condition of being widely seen, while also not being seen in particular, human terms. It is a nonreciprocal transaction of interest or attention, on unequal terms of exchange.”

“Her first book, Fame: The Hijacking of Reality is not a memoir–she hates them–it’s an in-depth look at what fame is and how it affects people.”

“Instead of crashing and burning, Bateman has found a life outside the maelstrom, ably described in this sharp, take-no-prisoners book.”

“Bateman delivers a blisteringly honest analysis of fame and her years in and out of the spotlight…Bateman’s impassioned narrative points out to those who relentlessly seek fame that rather than a blessing, it can be a curse.”

“Razor-sharp…Rarely has anyone written so honestly about the experience of being famous. In the interest of better understanding the figures we claim to know and love, Bateman’s book is a must-read.”

“Actor and writer Bateman…reflects on the toxicity of fame in this brutally honest, seemingly cathartic work…At just over 200 pages, Fame still manages to pack a punch.”

“If you’ve ever dreamed of being famous someday, you need to read this book. If you’ve ever called a celebrity, a ‘has-been’ or a ‘flash in the pan’ on social media, then you really need to read this book. Justine Bateman has crafted the most compelling and comprehensive treatise on the nature of fame that you’re ever likely to read. Through a fearless act of self-examination, which she conducts with the scientific detachment of an anthropologist, Bateman illuminates both the short- and long-term effects of attempting to navigate the labyrinth of celebrity.”

“Justine Bateman, in a voice both empathetic and take-no-prisoners, has produced a fascinating look at the psychology of present-day fame. She traces its roots down to humble beginnings in the injured psyche of every human, hoping to find a cure for what ails us all. In these early, heady days of the ascension of social media, in which everyone seems able to fulfill the Warholian dictum of fifteen minutes, Bateman casts a sober, never overly serious eye on today’s media landscape and emerges without cynicism on the hard-won side of love and acceptance.”

Fame: The Hijacking of Reality

Justine Bateman is a writer/director/producer with an impressive, decades-long resume in film and TV that includes a Golden Globe nomination and two Emmy nominations. Bateman wrote and produced her directorial film short debut Five Minutes, which premiered at the 2017 Toronto Film Festival and was chosen by seven more festivals, including the 2018 Tribeca Film Festival. Violet, Bateman’s critically-acclaimed directorial feature film debut of her own script, stars Olivia Munn, Luke Bracey, and Justin Theroux, and was an official selection at the 2021 SXSW Film Festival and the 2021 Toronto Film Festival. Her best-selling first book, Fame: The Hijacking of Reality, was published in 2018 by Akashic.