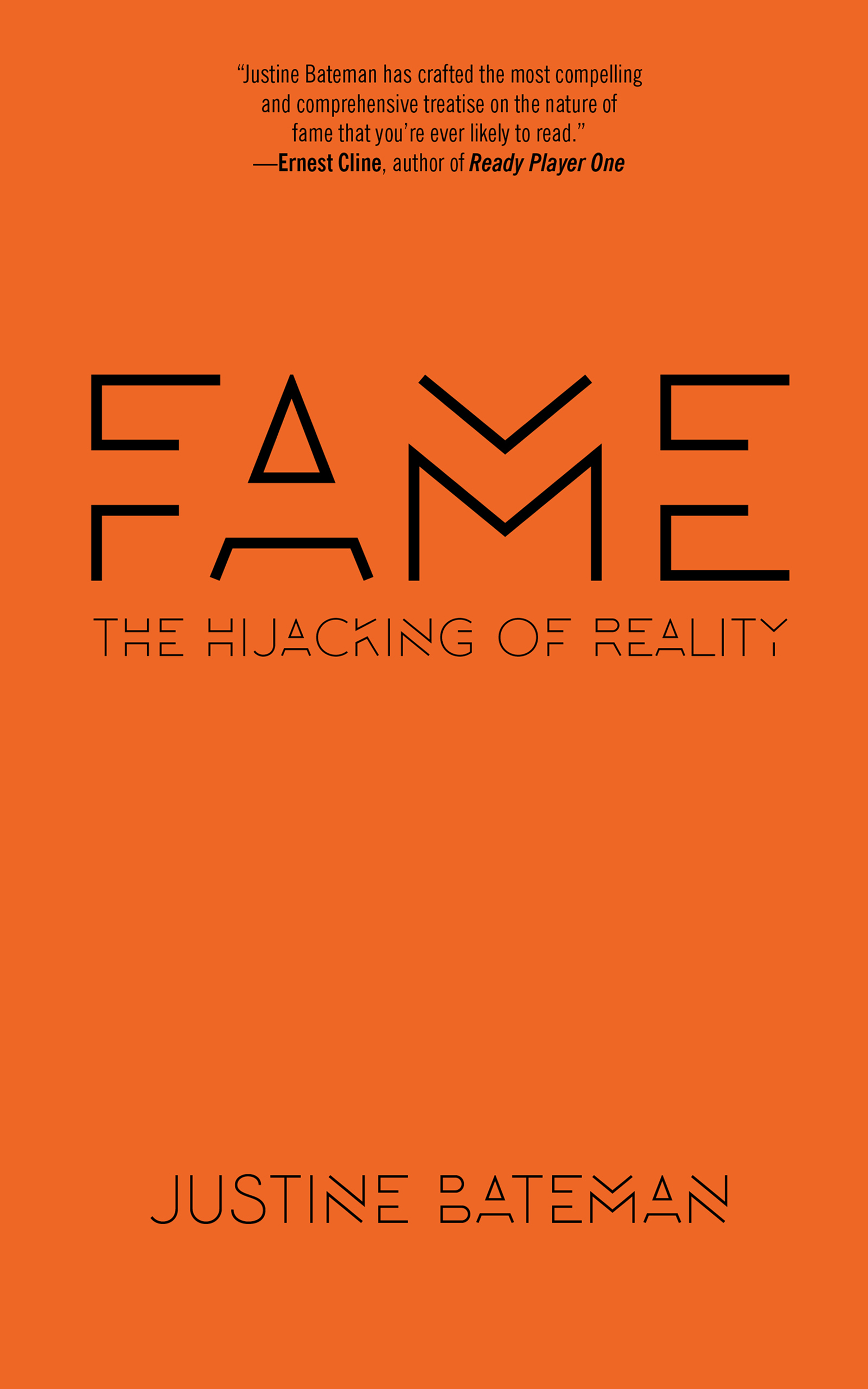 FAME
The Hijacking of Reality

Entertainment shows, magazines, websites, and other channels continuously report the latest sightings, heartbreaks, and triumphs of the famous to a seemingly insatiable public. Millions of people go to enormous lengths to achieve Fame. Fame is woven into our lives in ways that may have been unimaginable in years past.

And yet, is Fame even real? Contrary to tangible realities, Fame is one of those “realities” that we, as a society, have made. Why? What is it about Fame that drives us to spend so much time, money, and focus to create the framework that maintains its health?

Mining decades of experience, writer, director, producer, and actress Justine Bateman writes a visceral, intimate look at the experience of Fame. Combining the internal reality-shift of the famous, theories on the public’s behaviors at each stage of a famous person’s career, and the experiences of other famous performers, Bateman takes the reader inside and outside of the emotions of Fame. The book includes twenty-four color photographs to highlight her analysis.

“[A] visceral, insightful dissection of celebrity.”

“In this collection of razor-sharp essays, prolific actor and producer Bateman meditates on the fear, trauma, and access of fame…Rarely has anyone written so honestly about the experience of being famous. In the interest of better understanding the figures we claim to know and love, Bateman’s book is a must-read.”

“Instead of crashing and burning, Bateman has found a life outside the maelstrom, ably described in this sharp, take-no-prisoners book.”

“Producer and actress Bateman delivers a blisteringly honest analysis of fame and her years in and out of the spotlight…Bateman’s impassioned narrative points out to those who relentlessly seek fame that rather than a blessing, it can be a curse.”

“Justine Bateman, in a voice both empathetic and take-no-prisoners, has produced a fascinating look at the psychology of present-day fame. She traces its roots down to humble beginnings in the injured psyche of every human, hoping to find a cure for what ails us all. In these early, heady days of the ascension of social media, in which everyone seems able to fulfill the Warholian dictum of fifteen minutes, Bateman casts a sober, never overly serious eye on today’s media landscape and emerges without cynicism on the hard-won side of love and acceptance.”

“A smart, unflinching, touching, riveting, one-of-a-kind hybrid of memoir and cultural analysis. Fame in its contemporary form is strange and powerful and deeply American; so is Fame.”

“A raw look into stardom and how notoriety got to now with a style that would make Bukowski proud. Justine gives us a vivid, sharp and forceful read.”

“I thought my ideas about fame were intractable until Justine Bateman took them apart with her relentlessly truthful and engrossing investigation. She mines the subject with bracing honesty, and by including herself in the whole experiment she makes it hard for the reader to avoid examining their own ego, their own social agenda. Justine’s voice is fresh: she throws down with a free-associating slam that you won’t expect but can identify with, and the searching and sometimes profane rant that accompanies each idea is one you can’t help but trust. She distills it all into the questions: Why do we value this person over that one? And why do we ultimately resent the ones we overvalue? An honest and imminently quotable rumination by a qualified and intellectually formidable source.”

“If you’ve ever dreamed of being famous someday, you need to read this book. If you’ve ever called a celebrity, a ‘has-been’ or a ‘flash in the pan’ on social media, then you really need to read this book. Justine Bateman has crafted the most compelling and comprehensive treatise on the nature of fame that you’re ever likely to read. Through a fearless act of self-examination, which she conducts with the scientific detachment of an anthropologist, Bateman illuminates both the short- and long-term effects of attempting to navigate the labyrinth of celebrity.”

“Justine Bateman was famous before selfies replaced autographs, and bags of fan mail gave way to Twitter shitstorms. And here’s the good news, she took notes along the way. Justine steps through the looking glass of her own celebrity, shatters it, and pieces together, beyond the shards and splinters, a reflection of her true self. The transformation is breathtaking. Revelatory and raucous, fascinating and frightening, FAME is a hell of a ride.”

Michael J. Fox, actor and author of Lucky Man, Always Looking Up, and A Funny Thing Happened on the Way to the Future

“Justine Bateman’s new book FAME grabs you by the lapels. A raw, raging blast of honesty aimed squarely at what “being famous” is, does, and means. The absurd gravity of it, and the myriad public, personal, and private distortions it precipitates. This book is a bracing read.”

Jon Cryer, actor and author of So That Happened

“Bateman mixes personal stories of the hazards of experiencing fame at an early age with a sociologist’s eye for what makes Americans so fascinated with celebrity, and delivers it all in a rat-a-tat style that makes you feel like you are right there with her on the red carpet.”

Rachel Dratch, author of Girl Walks into a Bar

“FAME is a socio-pop-culture front-line must-read, told by one of the funniest, most powerful and elevated women I have ever met in my life.”

Kelly Cutrone, Fashion Publicist, New York Times best-selling author of If You Have to Cry, Go Outside

FACE: One Square Foot of Skin

Justine Bateman is a writer/director/producer/author with an impressive acting résumé that includes Family Ties, Satisfaction, Arrested Development, and many more. She has earned a Golden Globe nomination and two Emmy nominations. Bateman wrote and produced her directorial film short debut Five Minutes, which premiered at the 2017 Toronto Film Festival and was chosen by seven more festivals, including the 2018 Tribeca Film Festival. Violet, Bateman’s directorial feature film debut of her own script, stars Olivia Munn, Luke Bracey, and Justin Theroux, and was an official selection at the 2020 SXSW Film Festival. Face: One Square Foot of Skin is her latest work.