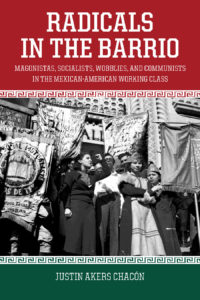 RADICALS IN THE BARRIO
Magonistas, Socialists, Wobblies, and Communists in the Mexican-American Working Class

Radicals in the Barrio uncovers a rich history of political radicalism within the Mexican and Chicano working class in the United States. Chacón clearly and sympathetically documents the ways that migratory workers carried with them radical political ideologies, new organizational models, and shared class experience, as they crossed the border into southwestern barrios during the early 20th century.

“Radicals in the Barrio reveals the rich and compelling history of the Mexican migrants who came to the United States before and after the 1910 Mexican Revolution and brought with them workplace militancy, radical ideology, organizational innovation, and class culture that made a profound impact on the labor movement of the day….Radicals in the Barrio is necessary reading as we live through a prolonged migrant and refugee crisis driven by capitalism, spawning wars, ecological devastation, grinding poverty, displacement, crime, and state violence.”

Praise for No One Is Illegal:

“The ‘immigration debate’ suffers from ideologically-induced amnesia. No One Is Illegal is brimming with the historical context—and brave analysis —that we need to address the political and above all human crisis of migration. This book arrives not a moment too soon… literally, there are lives on the line.”

“Is immigration really a “national crisis”? Chacón and Davis attack the question by revealing the disturbing, centuries-old context for the cross-border working-class, and the resurgence of reactionary anti-immigrant politics and racist vigilante violence. No One Is Illegal powerfully argues that the borders themselves are barriers to imagining real social justice. A urgent, important must-read.”

Justin Akers Chacón is an activist, writer, and educator in the San Diego-Tijuana border region. He is Professor of Chicana and Chicano Studies at San Diego City College. His previous work includes No One is Illegal: Fighting Racism and State Violence on the U.S.-Mexico Border (with Mike Davis).

No One Is Illegal: Fighting Racism and State Violence on the U.S.-Mexico Border (with Mike Davis)

The Border Crossed Us: The Case for Opening the US–Mexico Border