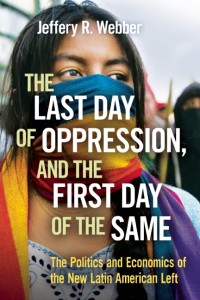 THE LAST DAY OF OPPRESSION, AND THE FIRST DAY OF THE SAME

The Politics and Economics of the New Latin American Left

In a penetrating volume, Jeffery Webber explains the political dynamics and conflicts underpinning the contradictory evolution of left-wing governments and social movements in Latin America in the last two decades.

Throughout the 2000s, Latin America transformed itself into the leading edge of anti-neoliberal resistance in the world. What is left of the Pink Tide today? What is their relationship to the explosive social movements that propelled them to power? As China’s demand slackens for Latin American commodities, will governments continue to rely on natural resource extraction?

Webber grounds his study in an analysis of trends in capitalist accumulation from 1990 to 2015, throughout Latin America and particularly in Argentina, Bolivia, Brazil, Chile, Ecuador, and Venezuela. He explains inequality there today with a de-colonial Marxist framework, rooted in a new understanding of class and its complex associations with racial and gender oppression. Webber also discusses indigenous and peasant resistance to the expansion of private mining, agro-industry, and natural gas and oil activities. The book concludes with chapters on “passive revolution” in Bolivia under Evo Morales (2006-2015) and debates around dual power and class composition during the era of Hugo Chávez in Venezuela (1999-2013).

“Webber’s book is a welcome but sobering contribution to a literature on the existential crisis of what some in the last quarter century called the left and others referred to, following the EZLN, as ‘civil society.”

“Over the past few years, Jeffery Webber has been one of the most prolific leftist critics of progressive or ‘Pink Tide’ governments in 21st-century Latin America. [The Last Day of Oppression and the First Day of the Same] is strong on both theory and empirical content…he presents cogent arguments in a cohesive way, and backs them up with a wealth of empirical evidence.”

“If you have ever wondered what happened to the beacon of hope that was, until recently, Latin America, this is the book to turn to. With supreme grasp of the continent’s politics, Jeffrey R. Webber unpacks the contradictions of the Left governments that once inspired dreams of a twenty-first century socialism. Most importantly, he shows how they banked on extracting natural resources for the global market and then distributing the crumbs to the masses – and how dismally that strategy failed. Weaving together GDP data and traditions of anticolonial resistance, individual biographies and debates in Marxist theory, always with a pulse of street movements running through the text, this is concrete analysis of the conjuncture as it should be done.”

Andreas Malm, author, Fossil Capital: The Rise of Steam Power and the Roots of Global Warming

“At a time when most scholars of contentious politics have abandoned political economy, Jeffery Webber’s latest book is a breath of fresh air. He shows how the rise of the new Latin American Left was linked to a regional crisis of neoliberal capitalism at the turn of the millennium. And he shows how the delayed effects of the global economic crisis of 2007–2008 pushed Left and Center-Left governments to adopt a politics of austerity, creating new opportunities for the Right. Webber’s analysis is also sensitive to the class and other struggles within and between Left parties and movements, struggles which shaped how these formations would react to changing material circumstances. In all, this is simply the best book we have on the rise and current crisis of the new Latin American Left. It’s also a model for how to analyze contentious politics.”

“Combining Marxist and decolonial theoretical frameworks, Webber brings us much more than a study on economic policies: an insightful assessment of class struggles against the capitalist oligarchies and the market dictatorship in Latin America. In a brilliant discussion of José Carlos Mariátegui, he brings to the fore the relevance, for the present popular, peasant, and indigenous rebellions, of a utopian-revolutionary dialectic between the precapitalist past and the socialist future.”

“A lucid, incisive and indispensable contribution for understanding the rise and fall of left and center-left governments associated with Latin America’s ‘pink tide.’ Webber validates the superiority of a critical Marxian and decolonial approach for slicing through the thick layers of the center-left’s self-serving rhetoric and for clearly identifying the tactical and strategic tasks popular movements have confronted in recent years. In the context of a fleeting commodities boom, the center-left’s embrace of extractivism, compensatory state politics, as well as its penchant for servicing the interests of domestic and foreign capital while demobilizing social movements, lie at the core of its ultimate defeat. His meticulously-crafted analysis examines the ebb and flow social movements in diverse Latin American countries, and spans the critical years that opened up with Venezuela’s 1989 Caracazo and are seemingly being brought to a close by right-wing resurgence evidenced most clearly in the 2016 institutional coup against Brazil’s Dilma Rousseff. The end of the cycle of progressive governments poses new historical challenges. If they are to be successfully navigated, Latin American scholars (and societies) must overcome the stultifying effects of prevailing liberal conceptions about democracy, markets, capitalism and the root causes of inequality; Jeffery Webber’s book unflinchingly and brilliantly shows us ‘why’ but also ‘how’ to begin doing so.”

Jeffery R. Webber is Senior Lecturer, School of Politics and International Relations, Queen Mary University of London. He is the author of Red October and From Rebellion to Reform in Bolivia. With Todd Gordon, he is co-author of Blood of Extraction: Canadian Imperialism in Latin America.

Rebellion to Reform in Bolivia: Class Struggle, Indigenous Liberation, and the Politics of Evo Morales