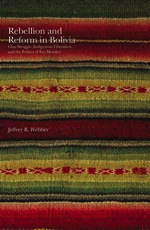 REBELLION TO REFORM IN BOLIVIA
Class Struggle, Indigenous Liberation, and the Politics of Evo Morales

Evo Morales rode to power on a wave of popular mobilizations against the neoliberal policies enforced by his predecessors. Yet many of his economic policies bare striking resemblance to the status quo he was meant to displace. Based in part on dozens of interviews with leading Bolivian activists, Jeff Webber exams the contradictions of Morales’ first term in office.

Jeffery R. Webber is Senior Lecturer, School of Politics and International Relations, Queen Mary University of London. He is the author of Red October and From Rebellion to Reform in Bolivia. With Todd Gordon, he is co-author of Blood of Extraction: Canadian Imperialism in Latin America.

“Jeffery Webber has become one of the shrewdest chroniclers of political developments in Latin America. In this exciting new book, Webber looks at the history of the political movements in Bolivia over the last decade, and in particular the MAS movement of President Evo Morales. As the Left attempts to find escape routes from neoliberalism, there is a need for sober assessments of what is being accomplished. This book does just that for Bolivia, and makes an outstanding contribution to our understanding of the new Andean Left.”

Gregory Albo, Professor of Political Economy, York University, Toronto. Co-author with Sam Gindin and Leo Panitch of In and Out of Crisis: The Global Financial Meltdown and Left Alternatives (2010)

“From Rebellion to Reform in Bolivia offers a critical examination of complex political processes in Bolivia since 2000 and challenges existing views of Evo Morales’ government. The analysis is characterized by exceptional rigor and clarity. Amidst widespread romanticism and ideological confusion, this book is a welcomed expression of sincere and realistic critique from the Left – an excellent example of constructive solidarity with anti-imperialist, socialist, and indigenous liberationist struggles. Webber offers a comprehensive, nuanced, and provocative account of the economic agenda, political reforms, foreign policy, intellectual currents, and social movement activity under the Morales administration. It is a valuable book for those who want to understand the contradictions within what has been described as the ‘Left tide’ in Latin America.”

Jasmin Hristov, author of Blood and Capital: The Paramilitarization of Colombia

“Webber’s book cuts bravely against the grain of the fashionable left-wing romanticizing of Evo Morales and the Bolivian process. It meticulously documents the extent to which neoliberalism still shapes Morales’s economic policies, and it successfully theorizes the contradictions of attempting to overlay an older model of state-led development—ECLAC’s structuralism, or import substitution—on top of an intact neoliberal foundation dominated by the export of non-value-added raw materials. The result is a ground-breaking expansion and application of the concept of ‘neostructuralism’ to the Bolivian experience, an analysis that also has implications for Venezuela and Brazil.”

“For a decade now, social movements in Bolivia have been in the forefront of struggles for global justice, and no commentator has more perceptively mapped this process than Jeffery Webber. In this exciting new study, Webber brings together his deep knowledge, critical powers and social justice commitments to provide a stunning overview of Bolivia’s movement from rebellion to reform. Everyone concerned with contemporary social movements and class struggles urgently needs this book. Not only does From Rebellion to Reform in Bolivia bring us up to speed about what is happening in the heart of the Bolivian struggle — it also offers enormous lessons for struggles for global justice across the planet.”

“Jeff Webber’s striking critique from the left of Evo Morales’s MAS government is a position that needs to be heard and absorbed. In a spirit of politically engaged analysis, Webber ably and admirably exposes the difficult contradictions that must be grappled with if what Bolivians call the ‘process of change’ — the effort to move beyond the neoliberal regime of domination — is to advance.”

“Webber’s study focuses on the mass movements ‘from below’ of 2000–2005 and how these have been canalised into parliamentary reform by Evo Morales’ MAS government. Where the general strikes and mass demonstrations of the first half of the decade displayed an epic degree of participation, radicalism and popular empowerment, the Morales government has been marked by cautious change initiated by the state apparatus alone… a major strength of the book is that the author punctures the myth that Morales’ critics are mere ‘armchair revolutionaries’. He portrays a vibrant and continuing movement from below, for instance the Huanuni miners’ struggles, and the mass resistance to the oligarchs’ September 2008 coup attempt at a time when the government merely preached ‘calm’.”

“To Webber, it was the influx of mestizo intellectuals (personified by current Vice-President Álvaro García Linera) into the party after the unexpectedly strong showing in the 2002 elections that led to the transformation of the MAS into a reformist party bent on the achievement of a ‘re-constituted neo-liberalism’—due to the class interest that it serves. Much of his book is taken up with an unabashed Marxist critique of the MAS government for its ‘new’ reformist course; for failing even to reduce appreciably the acute levels of poverty among indigenous people at a time of high national income from gas exports; and for allowing the ‘re-articulation of rightwing forces’…. [Of the three books under review] Webber offers the most informative account of the confrontations of 2008, which many observers at the time predicted would lead either to secession or to civil war.”

“Jeffery Webber makes a provocative argument about contemporary Bolivian political economy. He says that, despite all its anti-neoliberalism rhetoric, Evo Morales’ government has continued many of the features of Bolivia’s neoliberal past, instituting what he calls ‘reconstituted neoliberalism’. The liberatory potential of the early 2000’s, when indigenous and radical Left forces combined in mass mobilisations to overcome both racial and class exploitation, has been lost as Morales’ MAS party has moved away from mass politics to electoral politics. Webber catalogues a disappointing slide to reformism, arguing that the ‘revolutionary epoch’ did not produce a true social revolution, but rather a ‘neo-structuralist’ development model that reinforces existing class and capitalist structures…. Webber is aware that his interpretation of events in Bolivia will go against the grain for many on the Left, who hoped Morales would bring about the ‘cultural and democratic revolution’ he promised. Yet he argues forcefully for a reading that goes beyond discourse and rhetoric to a careful accounting of what the Morales government has actually done…. This book will be a significant intervention to the ongoing scholarly discussion about post-neoliberalism…. Clearly, the Morales revolution is being contested at every level. Webber’s book gives us more to think about as we observe this fascinating political process.”

“The advantage of a focus on contemporary El Alto… is that this is an ongoing struggle, and therefore open to continuous political interrogation and analysis. There already exist some excellent contemporary studies upon which to base interim conclusions. Jeffery Webber, for example, provides a compelling interpretation of events in Bolivia over the last decade or so. He views the years 2000–05 as a genuinely revolutionary epoch in a situation of deep cleavage between elite and popular classes. Popular rejection of neoliberal policies with respect to the use of treasured natural resources on the part of a state ruled by a traditional elite (and backed by the forces of international capital) fused with a long-standing struggle for liberation from racial repression by an indigenous, largely peasant population. The violence of the neoliberal regime provoked uprisings that led to Morales’s election in 2005…. While Morales’s political strategy after his election has helped to consolidate the power of the indigenous movements, according to Webber he effectively abandoned the class-based revolutionary perspective that emerged in 2000-05 in favor of a negotiated and constitutional compromise with landed and capitalist elites (as wells as accommodation to outside imperial pressures). The result, Webber argues, has been a ‘reconstituted neoliberalism’ (with ‘Andean characteristics’) after 2005, rather than any movement towards an anti-capitalist transition. The idea of a socialist transition has been postponed many years into the future.”

David Harvey, in Rebel Cities: From the Right to the City to the Urban Revolution (London: Verso, 2012)

The Last Day of Oppression, and the First Day of the Same: The Politics and Economics of the New Latin American Left