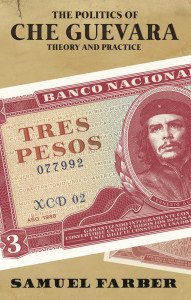 THE POLITICS OF CHE GUEVARA
Theory and Practice

Ernesto “Che” Guevara remains a symbol to legions of young rebels and revolutionaries. Fifty years after his death, Che’s face is still emblazoned across T-shirts and posters throughout the world.

Writers remain similarly possessed, with no shortage of pages written on Guevara’s breathtaking life crossing South America by motorcycle, trekking through the jungles of Cuba, leading military units in Africa, or his death in the mountains of Bolivia. These episodes are deployed as proof that Che is either a bloodthirsty tyrant or a fearless hero. These approaches have often obscured and mystified as much as they have illuminated his political legacy.

For the first time, those curious about Che Guevara will have a way to engage with his political ideas and practical political record. The Politics of Che Guevara is aimed at dispelling many of the myths about the revolutionary leader.

This volume examines Guevara’s views on socialism, democracy, and revolution and asks what lessons can be learned by today’s activists and social movements. It will also analyze Guevara’s conduct as guerrilla commander and government administrator in Cuba, his political perspectives on revolutionary agency and his attempts to implement them in Cuba, Africa and Bolivia, as well as Guevara’s economic views.

“In his previous books, the respected Marxist scholar Sam Farber has explored the paradoxes of the Cuban revolutionary experience with acute insight. Now, using sources unavailable to previous biographers, he scrupulously reconstructs the political thought of the twentieth century’s foremost revolutionary icon, illuminating the contradictions between Che’s radical egalitarianism and his austere elitism. Although he will always be revered for his heroic internationalism, Che’s ideas diverged sharply from classical Marxist conceptions of self-emancipation and workers’ democracy. Therein, as Farber shows so brilliantly, is the real tragedy of Third World revolution.”

“Across the world, Che Guevara is either branded a demon or idealized as a saint. Sam Farber chooses neither route, offering a complex and serious analysis of Guevara—a passionate and honest radical who could unfortunately never embrace socialism in its most democratic essence.”

“This book by Samuel Farber, a scrupulous historian and committed socialist, is indispensable and should be a part of the library of every young person who, impelled like Che, by a rebellious mind and a sense of justice, searches for an alternative to the inhuman, unjust, and predatory system that its high priests want to present as natural.”

“With characteristic precision, and methodical attention to detail, Samuel Farber interrogates the writings and politics of perhaps the most widely recognized revolutionary figure of the twentieth century — Che Guevara. Farber’s biting, but measured, critique of Che’s ideas and practice, deserves to be read widely and debated at length. The unity of socialism, democracy, and revolution to which this book hopes to contribute in theory, has never been more urgently required in praxis.”

“In this erudite, clear-headed, and unsparing account of the life and thought of one of the twentieth century’s iconic revolutionary and anti-imperialist figures, Samuel Farber writes from the left, as someone genuinely sympathetic to the stated goals of the Cuban revolution. He shows that Che Guevara’s concept of socialism included an inordinate sympathy for the single-party state of the Russian model, and that this led him to an elitist dismissal of independent trade unions and of worker’s democracy. In counterposing Guevara’s social vision to that of Karl Marx and of later anti-Stalinist leftists, Farber evokes unrealized emancipatory possibilities for Cuba in the 1960s, possibilities that have again become real for us today, in the era of Occupy and the Arab revolutions.”

Kevin B. Anderson, author of Marx at the Margins

“This is probably one of the most balanced and objective analyses that has been written about the mythical Argentinian guerrilla in recent years…. It is a very interesting and enjoyable book written with an efficient and rapid prose, which dives into one of the most complex contexts of the Cuban Revolution, the foundational decade of the sixties, and into one of the most attractive and polemical personalities of that process.”

Samuel Farber was born and raised in Marianao, Cuba, and came to the United States in February 1958. He obtained a Ph.D. in Sociology from the University of California at Berkeley in 1969 and taught at a number of colleges and universities including UCLA and, most recently, Brooklyn College, where he is a Professor Emeritus of Political Science. His scholarship on Cuba is extensive and includes many articles and two previous books: Revolution and Reaction in Cuba, 1933–1960 (Wesleyan University Press, 1976) and The Origins of the Cuban Revolution Reconsidered (University of North Carolina Press, 2006). Farber was active in the Cuban high school student movement against Fulgencio Batista in the 1950s, and has been involved in socialist politics for more than fifty years.

Cuba Since the Revolution of 1959: A Critical Assessment