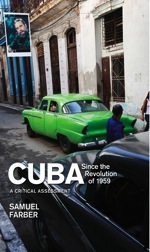 CUBA SINCE THE REVOLUTION OF 1959
A Critical Assessment

Uncritically lauded by the left, and impulsively denounced by the right, the Cuban revolution is almost universally viewed one dimensionally. Farber, one of its most informed leftwing critics, provides a much needed critical assessment of the Revolution’s impact and legacy.

“A courageous and formidable balance-sheet of the Cuban Revolution, including a sobering analysis of a draconian ‘reform’ program that will only deepen the gulf between revolutionary slogans and the actual life of the people.”

Mike Davis, professor, University of California, Riverside; author, Planet of Slums and In Praise of Barbarians

“Farber’s comprehensive and well-written assessment of Cuba’s experience since 1959 is rooted in history, informed by the comparative sociology of communist regimes, and rich in insightful and feisty analysis.”

“‘My political roots are in the classical Marxist tradition that preceded Stalinism in the USSR,’ writes Samuel Farber at the beginning of his book. Based on that political and theoretical outlook, opposed as much to neoliberal thought as to the perversions of Stalinist and postmodern communist statism, Farber sets out to critically explore the course followed by the society, government, and power structures that emerged from the Cuban Revolution of 1959. His field of research covers the irreducible hostility of the US establishment, Cuba’s historical inheritance, and the alternatives and decisions of its leaders in the last decades, up to and including the problems and challenges they face in these times. His study ends with a careful analysis of the premises and reform proposals currently being discussed in Cuba. A necessary and suggestive reading for all of those concerned with Cuba’s future and with the threat posed by the imperial power over the entire Caribbean region.”

“This important, very well written, and quite interesting book, evaluates the 52 years of the Cuban revolution under a classical Marxist (pre-Stalinist) viewpoint. Samuel Farber doesn’t pretend to be impartial: he advocates a transition toward a revolutionary, participatory socialist democracy, based on majority rule, civil rights, and liberties. And yet his book is thoroughly, painstakingly documented. He evaluates, with surprising insights, Cuba’s performance on national sovereignty, political democracy, economic growth, social welfare, race, gender, and the stand of domestic and external dissidents and critics. It is up-to-date, including an examination of the guidelines for the VI Party Congress, and ends with a good balance sheet and Marx and Engels’ views. Expect a strong reaction both from the right and the left. Don’t miss it!”

“Samuel Farber’s work on Cuba has long championed revolutionary democratic socialism from below. His latest book, a sophisticated and nuanced historical synthesis of the Cuban Revolution since 1959, provides an indispensable guide to the politics of a tiny island state that helped determine the history of Latin America and the dynamics of the Cold War in the latter half of the twentieth century. With a magisterial grasp of historical detail, and an incisive analytical eye, Farber offers an unparalleled cartography of the ideological debates and political outcomes of Cuba’s economic development, foreign policy, socio-cultural fluctuations in race and gender, and working-class and peasant realities under the rule of the Castro brothers. While acknowledging achievements of the revolutionary process in education and health, and defending Cuban sovereignty against imperial intervention, Farber shatters many of the idyllic myths propagated by left-wing apologists for the regime’s authoritarianism. The geriatric transition from Fidel to Raúl seems to promise a strategic shift toward a Cuban version of Sino-Vietnamese, state-led capitalism. A revolutionary democratic alternative, Farber shows, will only be possible through socialist resistance from below.”

Jeffery R. Webber, Queen Mary, University of London, author of From Rebellion to Reform in Bolivia: Class Struggle, Indigenous Liberation and the Politics of Evo Morales

“A very intriguing and illuminating account of the social and political background of the Cuban revolution and its early stages. A valuable study.”

Before Stalinism. The Rise and Fall of Soviet Democracy:

“When did the Russian Revolution go wrong and why? Whether one shares Samuel Farber’s views or not, his is an important, at once thoughtful and passionate, contribution to one of the major debates of our time.”

“Before Stalinism is an honest and searching attempt to identify the roots of Stalinism in the pre-Stalin period. It can be recommended as a painstaking and scrupulous assessment, animated by a commitment to socialist democracy.”

Social Decay and Transformation. A View from the Left:

“The left cannot ignore the growing social decay. It must provide rational answers for the immediate future and long-term answers leading beyond the confines of existing society. With this book, closely reasoned and well-argued but also full of contained political passion, Sam Farber makes an important contribution to our search for a radical alternative.”

The Origins of the Cuban Revolution Reconsidered:

“This is an excellent book. It is a first-rate synthesis and interpretation of the Cuban revolutionary experience — both the rebellion against the Batista regime and the consolidation of power in 1959-60. It is intelligent, well written, and well organized. It draws thoughtfully and well from prior scholarship on the Cuban revolution. The use of primary sources enriches the book at key points. It is a major contribution to the field of Cuban studies.”

Samuel Farber was born and raised in Marianao, Cuba, and came to the United States in February 1958. His books on Cuba include Revolution and Reaction in Cuba, 1933-1960 and The Origins of the Cuban Revolution Reconsidered. Farber was active in the Cuban high school student movement against Batista, and has been involved in socialist politics for more than fifty years.

The Politics of Che Guevara: Theory and Practice