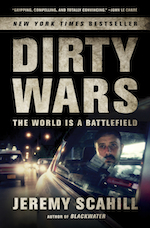 DIRTY WARS
The World Is a Battlefield
(New Edition)

Dirty Wars, the documentary, is now available on DVD

In Dirty Wars ( http://dirtywars.org/ ), investigative journalist Jeremy Scahill chases down the truth behind America’s covert wars. Dirty Wars was one of 16 films selected for the US Documentary Competition at the Sundance Film Festival 2013 (http://www.sundance.org/festival/release/2013-sundance-film-festival-announces-films-in-u.s.-and-world-competitions-/) and is the winner of the Sundance Film Festival 2013 Cinematography Award.

And find out more about director Richard Rowley:

Named the top investigative journalism book of 2013 by Nieman Reports

In Dirty Wars, Jeremy Scahill, author of the New York Times best-seller Blackwater, takes us inside America’s new covert wars. The foot soldiers in these battles operate globally and inside the United States with orders from the White House to do whatever is necessary to hunt down, capture, or kill individuals designated by the president as enemies.

Drawn from the ranks of the Navy SEALs, Delta Force, former Blackwater and other private security contractors, the CIA’s Special Activities Division, and the Joint Special Operations Command (JSOC), these elite soldiers operate worldwide, with thousands of secret commandos working in more than one hundred countries. Funded through “black budgets,” Special Operations Forces conduct missions in denied areas, engage in targeted killings, snatch and grab individuals, and direct drone, AC-130, and cruise missile strikes. While the Bush administration deployed these ghost militias, President Barack Obama has expanded their operations and given them new scope and legitimacy.

Dirty Wars follows the consequences of the declaration that “the world is a battlefield,” as Scahill uncovers the most important foreign policy story of our time. From Afghanistan to Yemen, Somalia, and beyond, Scahill reports from the frontlines in this high-stakes investigation and explores the depths of America’s global killing machine. He goes beneath the surface of America’s covert wars, conducted in the shadows, outside the range of the press, without effective congressional oversight or public debate. And, based on unprecedented access, Scahill tells the chilling story of an American citizen marked for assassination by his own government.

As US leaders draw the country deeper into conflicts across the globe, setting the world stage for enormous destabilization and blowback, Americans are not only at greater risk — we are changing as a nation. Scahill unmasks the shadow warriors who prosecute these secret wars and puts a human face on the casualties of unaccountable violence that is now official policy: victims of night raids, secret prisons cruise missile attacks and drone strikes, and whole classes of people branded as “suspected militants.” Through his brave reporting, he exposes the true nature of the dirty wars the United States government struggles to keep hidden.

“[A] courageous and exhaustive examination of the way a number of clandestine campaigns—full of crimes, cover-ups, and assassinations—became the United States’ main strategy for combating terrorism.”

“There is no journalist in America, in the world, who has reported on what the war on terror actually looks like under the Obama administration better than … Jeremy Scahill. His amazing, comprehensive chronicle of the Obama war on terror [is] the new book Dirty Wars.. .. A film, which is incredible and a must-see, of the same name… is probably the most comprehensive account to date of what America’s global battlefield looks like, a battlefield that was constructed with each new mission and the deployment of special forces and each new drone strike and each new frontier, the product of hundreds of individual decisions made under duress in reaction to an uncertain world that now add up to a global battlefield without frontlines or clearly marked boundaries. This book is an unbelievable accomplishment. The movie is an incredible accomplishment … Whatever your politics, you should read this book. It is an incredibly carefully reported book. People who come to this book expecting a polemic, I think will be surprised to a find a book that really in many ways lets the facts speak for themselves. What this book does is show a side of our unending wars that we haven’t seen. … I think every member of Congress should read this book.”

Chris Hayes, All In, MSNBC

“Dirty Wars is not politically correct. It is not a history of the last decade as seen from inside the White House, or from the pages of the New York Times and Washington Post. Scahill’s book takes us inside Dick Cheney’s famed ‘dark side’ and tells us, with convincing detail and much new information, what has been done in the name of America since 9/11.”

“Dirty Wars is the most thorough and authoritative history I’ve read yet of the causes and consequences of America’s post 9/11 conflation of war and national security. I know of no other journalist who could have written it: For over a decade, Scahill has visited the war zones, overt and covert; interviewed the soldiers, spooks, jihadists, and victims; and seen with his own eyes the fruits of America’s bipartisan war fever. He risked his life many times over to write this book, and the result is a masterpiece of insight, journalism, and true patriotism.”

Barry Eisler, novelist and former operative in the CIA’s Directorate of Operations

“There is no journalist in America who has exposed the truth about US government militarism more bravely, more relentlessly and more valuably than Jeremy Scahill. Dirty Wars is highly gripping and dramatic, and of unparalleled importance in understanding the destruction being sown in our name.”

“Dirty Wars will earn its place in history as one of the most important pieces of literature related to over a decade of failed American foreign policy strategy that continues to exist to this day. It’s also one of the most grounded and thoroughly researched books I’ve read on the subject of covert U.S. operations in the twenty-first century. A must read for anyone that cares about this country and the direction we are heading.”

“[One] of the best intelligence reporters on the planet … Scahill has covered the worldwide wanderings of JSOC task forces and their intersection for years, and he takes a deeper look at their expanded post 9/11 mission set. He has incredible sources…”

Marc Ambinder, editor-at-large of The Week

Jeremy Scahill is one of the three founding editors of The Intercept. He is an investigative reporter, war correspondent, and author of the international bestselling books Dirty Wars: The World Is a Battlefield and Blackwater: The Rise of the World’s Most Powerful Mercenary Army. He has reported from Afghanistan, Iraq, Somalia, Yemen, Nigeria, the former Yugoslavia, and elsewhere across the globe. Scahill has served as the national security correspondent for The Nation and Democracy Now!.

Scahill’s work has sparked several congressional investigations and won some of journalism’s highest honors. He was twice awarded the prestigious George Polk Award, in 1998 for foreign reporting and in 2008 for Blackwater. Scahill is a producer and writer of the award-winning film Dirty Wars, which premiered at the 2013 Sundance Film Festival and was nominated for an Academy Award.

Praise for Blackwater: The Rise of the World’s Most Powerful Mercenary Army

“A crackling exposé of the secretive military contractor Blackwater.”

“So scary and so illuminating.”

“Scahill is a one-man truth squad.”

“[An] utterly gripping and explosive story.”

“Scahill’s page-turning collection of intrigue and insight into the underworld of privatized warfare is well researched, thoroughly documented and, as a result, extremely frightening.”