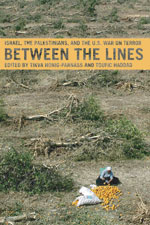 BETWEEN THE LINES
Israel, the Palestinians, and the U.S. War on Terror

By Toufic Haddad and Tikva Honig-Parnass

A challenge to fundamentally rethink the basis of the Israeli-Palestinian conflict today.

This thought-provoking analysis – written by a Palestinian and Israeli who collaborate together to challenge the dominant understanding of the Israeli-Palestinian conflict – shows how the apartheid-like conditions of Palestinians today have deep roots in the history of Israel.

The only book of its kind to be written jointly by an Israeli, who fought in the Palmach to establish the state of Israel in 1948, and a Palestinian.

“Honig-Parnass … documents Israel’s determination to make a major push to destroy Palestinian resistance and nationalism and fulfill the Zionist dream of an assured Jewish majority in Palestine. … This book complements and expands upon Sara Roy’s recent book, Failing Peace: Gaza and the Palestinian-Israeli Conflict, and is required reading for anyone who wants to understand why Oslo failed and why Israeli violence has since accelerated against Palestinians.”

“Between the Lines frankly makes for some painful but necessary reading. … [The book] helps us understand how the dynamics of resistance and brutal repression, although rooted in the whole history of Zionist settlement and Palestinian dispossession, have intensified during the first six years of the 21st century, especially as the Second Intifada confronted the full force of the post-9/11 reaction. Without a fundamental reversal of current trends, a reversal that requires the struggle for what the authors call ‘the full de-Zionization of the state of Israel’ and a breaking of its role as a branch office of the American Empire and military-industrial complex, the course toward Israeli national suicide and the destruction of the Middle East is set.”

David Finkel, Against the Current

“A fully engaging book, an intense read, Between the Lines provides a strong and comprehensible analysis of the al-Aqsa Intifada, its consequences, and probable future developments. … [E]xpands the library of information and consciousness concerning the occupation and ethnic cleansing that is the story of Palestine.”

“The destruction of a nation is not an everyday event in history. It is being carried out before our eyes, systematically and consciously, with cruelty and self-righteousness, and with the backing of the global superpower. These acute and informed essays develop a perspective on the background and unfolding of these events that is remote from anything likely to be heard in the West. They merit close attention and thoughtful consideration.”

”This collection provides a lucid and critical analysis of the Israeli and American policies in the Middle East. The disastrous repercussions of this unholy alliance are presented in this collection through incisive and timely contributions. In the best tradition of [the journal] Between the Lines, readers will be rewarded by this collection that unmasks and exposes what the mainstream media refuses to report or admit.”

“This collection from the very much missed bulletin Between the Lines gives an idea of the considerable accumulated debt that all those passionately interested in the Israel-Palestine issue owe to Tikva Honig-Parnass and Toufic Haddad. … The long introduction alone – a masterly synopsis of the histories of Zionism, Israel, and the Palestinian people – makes the book well worth acquiring.”

Toufic Haddad of Ramallah and Israeli Tikva Honig-Parnass are editors of the left-wing journal Between the Lines. Honig-Parnass is also the author of False Prophets of Peace: Liberal Zionism and the Struggle for Palestine.