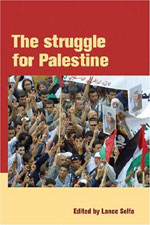 THE STRUGGLE FOR PALESTINE

In this important new collection of essays, leading international solidarity activists offer insight into the ongoing struggle for Palestinian freedom and for justice in the Middle East.

After years of being told that a U.S.-brokered “peace process” would bring them a better life and their own state, Palestinians today are worse off than they have ever been. Israel’s illegal settlements have doubled.

Unemployment and poverty have risen dramatically. And Palestinians face the daily humiliations and brutality of life under military occupation.

The Struggle for Palestine gets behind the headlines and myths about the occupation and the “peace process” to expose the role of the U.S. government in sponsoring Israel’s war against the Palestinians. It documents the efforts of Palestinians to win their freedom, most recently in the Al Aqsa Intifada. And it presents a clear vision of a real solution: the creation of a secular, democratic state in all of Palestine.

With maps, detailed notes, a detailed bibliography, and resources for further information and action.

Lance Selfa is a researcher and author based in Chicago, Illinois. An editor and contributor to the International Socialist Review, Selfa is the author of The Democrats: A Critical History (Haymarket, 2008).

US Politics in an Age of Uncertainty: Essays on a New Reality