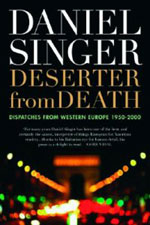 A self-described “deserter from death,” Polish-born Daniel Singer narrowly escaped the Holocaust to become one of the European left’s leading social and political commentators. From the Algerian crisis in the late fifties, through the world-shaking events of May ‘68, to the post-Reagan, post-Thatcher era, this is an effervescent social history of the past half-century.

Deserter from Death collects Singer’s writing from when he was a young reporter for The Economist to his final years as the Nation magazine’s celebrated European correspondent. This is the first major collection of Singer’s work to be published since his death in December 2000.

“I can think of no journalist more versed, more hip to what is happening in Europe today than Daniel Singer.”

“There is an alternative to rampant inequality and the corruptions of power, and — ever so modestly and persuasively — Daniel Singer points the way.”

“If there was one insistent note in his political analysis, it was that movements for independence, peace, and social justice must be based, if they are to fulfill their moral promise, on the mass mobilization of people, and not on the leadership of an individual or a party.”

From the foreword by Howard Zinn

Daniel Singer was born in Warsaw in 1926, and was educated in France, Switzerland and England. He was a contributor to The Economist, The New Statesman, the Tribune and The Nation (where he was Europe correspondent for twenty years), and appeared as a commentator on NPR, “Monitor Radio,” and the BBC, as well as Canadian and Australian broadcasting.

Prelude to Revolution: France in May 1968