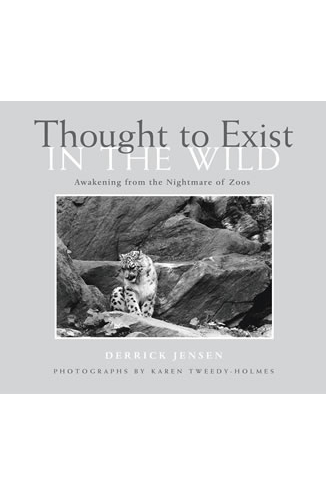 Thought to Exist in the Wild is a passionate and unflinching examination of zoos in our society. Combining elegant, stunning photos with a deep and probing essay, this book presents a critical look at these institutions, the individual animals who live in them, and of ourselves.

Author Derrick Jensen is a well known and respected environmental writer and activist with numerous award-winning books to his credit. Photographer Karen Tweedy-Holmes, also brings impressive credentials to the project, including photography for National Geographic magazine.

“Finally, someone has the courage to question zoos. Animals in zoos are not ambassadors teaching us about the natural world, they’re unwilling prisoners, teaching us how we as humans seem to need to dominate every living being on the planet. This is a brave book and a much needed voice on behalf of the animals.”

“Derrick Jensen lays bare the reality of zoos: prisons for the wild creatures whose worlds we have utterly destroyed with our ‘progress’. … Yet, there is the glint of the unbreakable spirit of life in each of these beautiful living beings’ eyes, and Jensen infuses us with hope for something better.”

“Thought to Exist in the Wild is a great book. It’s beautiful; it’s true; it’s visionary; it’s clear; and it’s going to have an immense impact on the consciousness of anyone who reads it.”

John Robbins, author of Diet For A New America, The Food Revolution, and Healthy At 100

“An impassioned argument for the dissolution of zoos and a return to a lifestyle that enables man to live in equal relationship to his animal, plant, and inanimate neighbors in nature … an intelligent, well-organized debate … written in a conversational tone that engages the reader while tackling a subject encompassing psychological, social, and environmental issues … [Jensen] writes with a conviction that leads readers to think deeply about what their own beliefs are about zoos.”

“A heartbreaking look into the reality faced by animals in many zoos.”

Derrick Jensen is an activist, teacher, and prize-winning author of numerous books, including The Culture of Make Believe, A Language Older Than Words, Listening to the Land, Walking on Water: Reading, Writing, and Revolution, Thought to Exist in the Wild: Awakening from the Nightmare of Zoos, and co-author (with George Draffan) of Welcome to the Machine: Science, Surveillance, and the Culture of Control. His writing has appeared in New York Times Magazine, Audubon, The Sun Magazine, and Orion Magazine, among many others. Recently named Press Action Person of the Year, his speaking engagements pack bookstores, university auditoriums, and conference halls across the nation. He lives in Northern California and continues to write about the destructive impact of industrial civilization, our connection to the land, our kinship with one another, and our place in the living world. His website is http://www.derrickjensen.org/.

Based in New York City, Karen Tweedy-Holmes has long been devoted to making black-and-white portraits of psychological depth and intensity. A critically acclaimed exhibition of her images of the male nude in 1969 was the first major gallery presentation of the subject in the United States by a woman. Her ongoing projects include sculptural details of New York City and Victorian period architecture, including landmark courthouses of the United States. Her deepest interest is the animal world and she has documented animal life in the wild and in zoos since 1970. In recent years her work has concentrated on the landscape and wildlife of the desert Southwest and on macrophotography of insects and plants. For more than thirty years she has been committed to a self-assigned project — to produce a powerful and extensive group of black-and-white images of captive animals that would compel the viewer to question the concept of wild animals’ incarceration as entertainment. Her website is http://www.tweedypix.com/.

A Language Older Than Words

Listening to the Land

The Culture of Make Believe

Welcome to the Machine: Science, Surveillance, and the Culture of Control