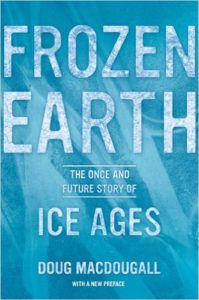 FROZEN EARTH
The Once and Future Story of Ice Ages

In this engrossing and accessible book, Doug Macdougall explores the causes and effects of ice ages that have gripped our planet throughout its history, from the earliest known glaciation—nearly three billion years ago—to the present. Following the development of scientific ideas about these dramatic events, Macdougall traces the lives of many of the brilliant and intriguing characters who have contributed to the evolving understanding of how ice ages come about. As it explains how the great Pleistocene Ice Age has shaped the earth’s landscape and influenced the course of human evolution, Frozen Earth also provides a fascinating look at how science is done, how the excitement of discovery drives scientists to explore and investigate, and how timing and chance play a part in the acceptance of new scientific ideas.

Macdougall describes the awesome power of cataclysmic floods that marked the melting of the glaciers of the Pleistocene Ice Age. He probes the chilling evidence for “Snowball Earth,” an episode far back in the earth’s past that may have seen our planet encased in ice from pole to pole. He discusses the accumulating evidence from deep-sea sediment cores, as well as ice cores from Greenland and the Antarctic, that suggests fast-changing ice age climates may have directly impacted the evolution of our species and the course of human migration and civilization. Frozen Earth also chronicles how the concept of the ice age has gripped the imagination of scientists for almost two centuries. It offers an absorbing consideration of how current studies of Pleistocene climate may help us understand earth’s future climate changes, including the question of when the next glacial interval will occur.

“Offers authoritative speculation and explanations of future climate changes, their causes, and their impact on both the natural world and human civilization.”

“It was not until the 1800s that close observers of the countryside were able to supply a kind of forensic geology to the scars left behind by flowing ice, and thereby reconstruct the chronology of glaciations past. Doug Macdougall . . . tells an enlightening tale of how that knowledge came to be, and what the science of geology has discovered about the causes and consequences of the ice ages in recent years.”

“Frozen Earth is a comfortable-to-read ecotale, exactly the right present to keep a liberal granny quiet in the post-Hanukkah, post-Christmas longueurs before the world begins again in 2005. Denied North by Northwest again, while the kids soak in neo-reality reloading The Matrix, she can lose herself in a palaeo-world by the fireside. Who knows, she might rise up on wings of an eagle and force them to watch The Day After Tomorrow.”

“A remarkable story. . . . Nowadays, with climate change acknowledged in the media, perhaps the causes and consequences of past changes will once again become truly popular issues. This book may help make them so.”

“Frozen Earth . . . should be required reading for anyone interested in the future of the planet.”

“This is a highly readable account of the nature of ice ages throughout earth’s history and the evolution of their scientific understanding since the introduction of the term by Louis Agassiz in the 1830s. The shifts in opinion on the merits of the various explanations of ice ages traced by Macdougall make fascinating reading.”

“Frozen Earth is a thorough and compelling account of the history of ice on earth and of the scientists who uncovered the extraordinary role that ice ages have played in shaping our world.”

“Macdougall takes us on a fascinating journey through the realm of ice age science. He deciphers some of the basic mysteries of the bitter climatic regimes that have gripped the earth in the past and will probably grip it again in the future. This engrossing book has important lessons for anyone concerned with global warming and future climatic change.”

Nature’s Clocks: How Scientists Measure the Age of Almost Everything

Why Geology Matters: Decoding the Past, Anticipating the Future

Doug Macdougall is a writer and geoscientist and a professor emeritus of Earth Schiences at the Scripps Institution of Oceanography, University of California, San Diego. He is a fellow of the American Geophysical Union and the Meteoritical Society, and he has written four previous non-fiction trade books as well as one novel. See his website here: www.dougmacdougall.com