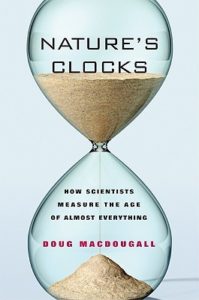 NATURE’S CLOCKS
How Scientists Measure the Age of Almost Everything

“Radioactivity is like a clock that never needs adjusting,”writes Doug Macdougall. “It would be hard to design a more reliable timekeeper.” In Nature’s Clocks, Macdougall tells how scientists who were seeking to understand the past arrived at the ingenious techniques they now use to determine the age of objects and organisms. By examining radiocarbon (C-14) dating—the best known of these methods—and several other techniques that geologists use to decode the distant past, Macdougall unwraps the last century’s advances, explaining how they reveal the age of our fossil ancestors such as “Lucy,” the timing of the dinosaurs’ extinction, and the precise ages of tiny mineral grains that date from the beginning of the earth’s history. In lively and accessible prose, he describes how the science of geochronology has developed and flourished. Relating these advances through the stories of the scientists themselves—James Hutton, William Smith, Arthur Holmes, Ernest Rutherford, Willard Libby, and Clair Patterson—Macdougall shows how they used ingenuity and inspiration to construct one of modern science’s most significant accomplishments: a timescale for the earth’s evolution and human prehistory.

“Rich in historical tidbits, this book is a delightful study of how scientists figured out analytical techniques that revealed the history of the earth.”

“Science buffs from all fields along with general readers will find this a helpful handbook on how we are now able to travel to the distant past.”

“The heart of the book reveals ingenious science.”

“A lucid and engaging account of the scientific revolution that changed the way we think about our planet and ourselves.”

Frozen Earth: The Once and Future Story of Ice Ages

Why Geology Matters: Decoding the Past, Anticipating the Future

Doug Macdougall is a writer and geoscientist and a professor emeritus of Earth Sciences at the Scripps Institution of Oceanography, University of California, San Diego. He is a fellow of the American Geophysical Union and the Meteoritical Society, and he has written four previous non-fiction trade books as well as one novel. See his website here: www.dougmacdougall.com