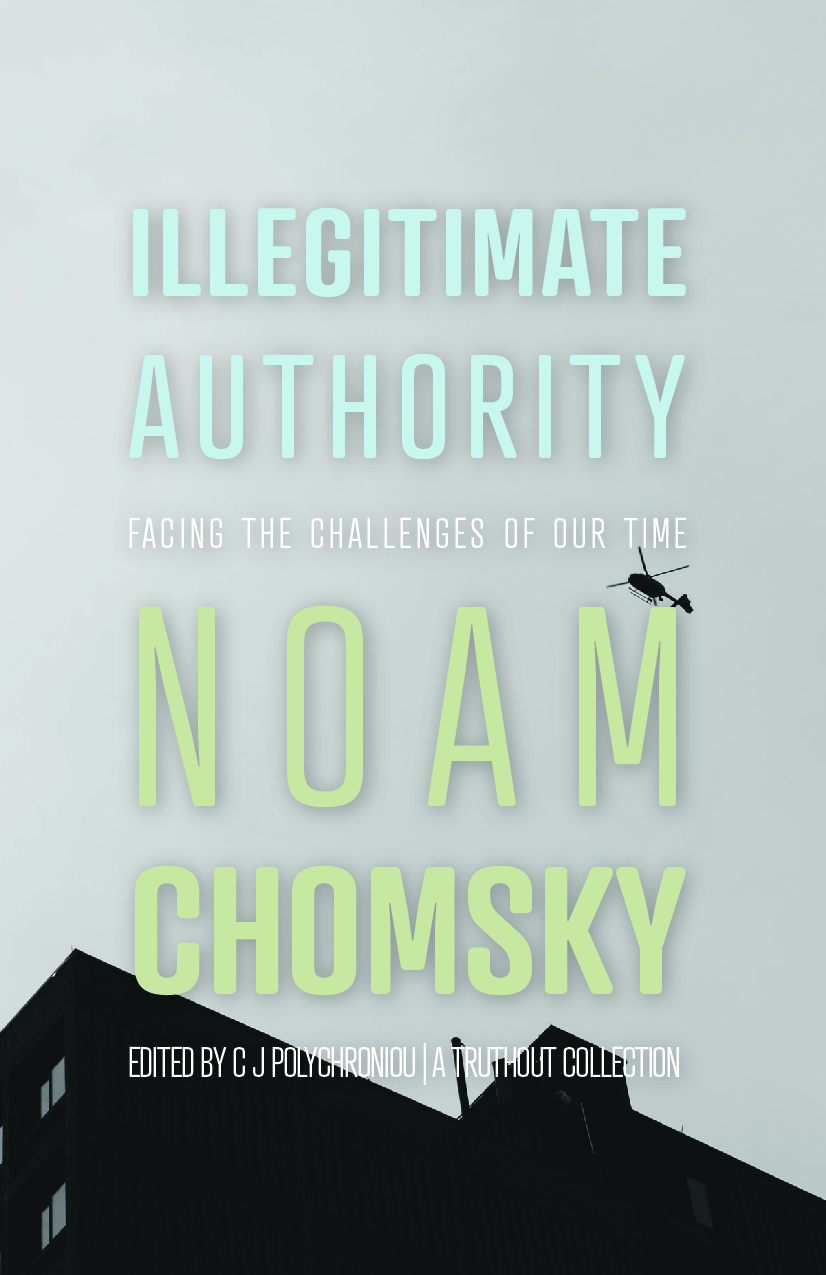 ILLEGITIMATE AUTHORITY
Facing the Challenges of Our Time

A wide-ranging and incisive collection of interviews with Noam Chomsky, addressing the urgent questions of this tumultuous time, particularly the fallout of the war in Ukraine.

In these informative interviews, conducted for Truthout by C.J. Polychroniou, Chomsky addresses the rapidly deteriorating quality of democracy in the United States and the crumbling of the social fabric, fractures of the Biden era, including rising tensions among the United States, China, and Russia, the War in Ukraine, the Supreme Court decision to overturn Roe v Wade, and the ongoing fallout of COVID-19. Throughout, Chomsky “remains … a beacon of hope in the darkest of times” (Sarah Jaffe).

Praise for Optimism Over Despair:

“This book of interviews with Noam Chomsky is a must read in these troubling times. [A]n excellent collection of interviews that highlights Chomsky’s encyclopedic knowledge of the key issues of our day and his unwavering criticism of the regime of the global 1%.”

Deepa Kumar, author, Islamophobia and the Politics of Empire

“In this brilliant series of recent and wide-ranging interviews, Noam Chomsky combines an astounding breadth of knowledge, great depth of insight, clarity in explaining his ideas, and a relentless commitment to social and economic justice. The full package is simply exhilarating, especially in our current dismal era of Donald Trump. Optimism over Despair is a book to devour.”

Noam Chomsky is Institute Professor (emeritus) in the Department of Linguistics and Philosophy at the Massachusetts Institute of Technology and Laureate Professor of Linguistics and Agnese Nelms Haury Chair in the Program in Environment and Social Justice at the University of Arizona. His work is widely credited with having revolutionized the field of modern linguistics. Chomsky is the author of numerous bestselling political works, which have been translated into scores of languages. Recent books include What Kind of Creatures Are We?, as well as Optimism Over Despair, Notes on Resistance, and Chronicles of Dissent. He lives in Tucson, AZ.

C.J. Polychroniou is a political economist/political scientist who has taught and worked in universities and research centers in Europe and the United States. His main research interests are in European economic integration, globalization, the political economy of the United States and the deconstruction of neoliberalism’s politico-economic project. He is a columnist for Global Policy Journal and a regular contributor to Truthout as well as a member of Truthout’s Public Intellectual Project. He has published several books, including, with Noam Chomsky, Optimism Over Despair and The Precipice, and his articles have appeared in a variety of journals, magazines, newspapers, and popular news websites. Many of his publications have been translated into several foreign languages, including Croatian, French, German, Greek, Italian, Portuguese, Spanish and Turkish. He lives in Conshohocken, PA.