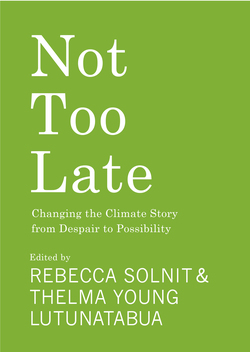 NOT TOO LATE
Changing the Climate Story from Despair to Possibility

An energizing case for hope about the climate, from Rebecca Solnit (“the voice of the resistance”—New York Times), climate activist Thelma Young Lutunatabua, and a chorus of voices calling on us to rise to the moment.

Not Too Late brings strong climate voices from around the world to address the political, scientific, social, and emotional dimensions of the most urgent issue human beings have ever faced. Accessible, encouraging, and engaging, it’s an invitation to everyone to understand the issue more deeply, participate more boldly, and imagine the future more creatively.

In concise, illuminating essays and interviews, Not Too Late features the voices of Indigenous activists, such as Guam-based attorney and writer Julian Aguon; climate scientists, among them Jacquelyn Gill and Edward Carr; artists, such as Marshall Islands poet and activist Kathy Jeñtil-Kijiner; and longtime organizers, including The Tyranny of Oil author Antonia Juhasz and Emergent Strategy author adrienne maree brown.

Shaped by the clear-eyed wisdom of editors Rebecca Solnit and Thelma Young Lutunatabua, and enhanced by illustrations by David Solnit, Not Too Late is a guide to take us from climate crisis to climate hope.

Rebecca Solnit is the author of more than twenty books, including Orwell’s Roses; Hope in the Dark; Men Explain Things to Me; A Paradise Built in Hell: The Extraordinary Communities that Arise in Disaster; and A Field Guide to Getting Lost. A longtime climate and human rights activist, she serves on the board of the climate group Oil Change International, and the advisory boards of Dayenu and Third Act.

Thelma Young Lutunatabua is a digital storyteller and activist. She is the co-founder of Not Too Late. She currently works at The Solutions Project. Before that she’s worked in various roles supporting the global climate movement, as well as other human rights endeavors around the world. She calls Fiji and Texas home.

“Absolutely beautiful, absolutely necessary, and absolutely right! Two of our greatest climate voices have rounded up many more realistic and determined colleagues who help us see the path ahead much more clearly!”

Bill McKibben, author of Eaarth: Making a Life on a Tough New Planet and founder of Third Act

“A powerful anthology of dispatches from the front lines of the struggle over the future of the planet, by some of the most important activist voices of our time. That such a collection could be assembled is itself a cause for hope.”

Amitav Ghosh, author of The Nutmeg’s Curse: Parables for a Planet in Crisis

“Not Too Late is the exact message we need today. Rebecca Solnit and Thelma Young Lutunatabua have gathered voices from around the world, each living proof that one can understand grim climate science, understand the scale of political obstacles and still know that a better future is not out of reach. It’s late, but not too late. Grab this book, read up and let’s get to work.”

“Giving up on humanity by giving up on solving the climate crisis is not an option. This book uniquely provides strategic direction on how we can create the future we need, the future we all want. It also gives us the imaginative and emotional prowess to strengthen our courage and creativity along the way.”

“The future will be decided by a race between two powerful forces — the mounting impacts of climate change, which are becoming more apparent every day, and the accelerating power of climate solutions and climate activists around the world. We can still win this race, although we only have a narrow window of time to do so. But we get no mulligans, no do-overs, and no time to spare. We get only one shot at it. This amazing volume reminds us that we can still win this race — if we come together and try.
Rather than accept defeat on climate change, these authors show us what’s possible. They inspire us to imagine a better world — a world where we stop climate change, restore nature, improve human wellbeing, address long-standing problems of equity and justice, and leave our descendants a world we can be proud of. This should be required reading for anyone who cares about the world and its future.”