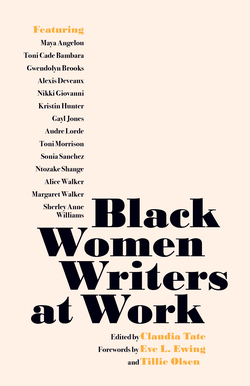 “Black women writers and critics are acting on the old adage that one must speak for oneself if one wishes to be heard.” —Claudia Tate, from the introduction

Long out of print, Black Women Writers at Work is a vital contribution to Black literature in the 20th century.

Responding to questions about why and for whom they write, and how they perceive their responsibility to their work, to others, and to society, the featured playwrights, poets, novelists, and essayists provide a window into the connections between their lives and their art.

Finally available for a new generation, and featuring a new foreword by Eve L. Ewing, this classic work has an urgent message for readers and writers today.

“Tate’s probing, provocative and insightful questions set a new standard for the interview as a genre.”

Claudia Tate was a professor of English and African-American studies at Princeton University, known for her innovative contributions to African-American literary criticism. Black Women Writers at Work was Tate’s first book.

Eve L. Ewing is a writer, scholar, artist, and educator from Chicago. Her work has appeared in Poetry, the New Yorker, the New Republic, the Nation, the Atlantic, and many other publications. She is a sociologist at the University of Chicago School of Social Service Administration.