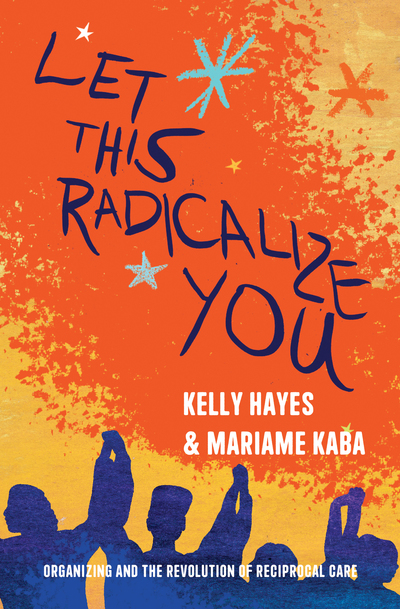 LET THIS RADICALIZE YOU
Organizing and the Revolution of Reciprocal Care

What fuels and sustains activism and organizing when it feels like our worlds are collapsing? Let This Radicalize You is a practical and imaginative resource for activists and organizers building power in an era of destabilization and catastrophe.

Longtime organizers and movement educators Mariame Kaba and Kelly Hayes examine some of the political lessons of the COVID-19 pandemic, including the convergence of mass protest and mass formations of mutual aid, and consider what this confluence of power can teach us about a future that will require mass acts of care, rescue and defense, in the face of both state violence and environmental disaster.

The book is an assemblage of co-authored reflections, interviews and questions that are intended to aid and empower activists and organizers as they attempt to map their own journeys through the work of justice-making. It includes insights from a spectrum of experienced organizers, including Sharon Lungo, Carlos Saavedra, Ejeris Dixon, Barbara Ransby, and Ruth Wilson Gilmore about some of the difficult and joyous lessons they have learned in their work.

Kelly Hayes is the host of Truthout’s podcast “Movement Memos” and a contributing writer at Truthout. Kelly’s written work can also be found in Teen Vogue, Bustle, Yes! Magazine, Pacific Standard, NBC Think, her blog Transformative Spaces, The Appeal, the anthology The Solidarity Struggle: How People of Color Succeed and Fail At Showing Up For Each Other In the Fight For Freedom and Truthout’s anthology on movements against state violence, Who Do You Serve, Who Do You Protect? Kelly is also a direct action trainer and a co-founder of the direct action collective Lifted Voices. Kelly was honored for her organizing and education work in 2014 with the Women to Celebrate award, and in 2018 with the Chicago Freedom School’s Champions of Justice Award. Kelly’s movement photography is featured in “Freedom and Resistance” exhibit of the DuSable Museum of African American History.

Mariame Kaba is an organizer, educator and curator who is active in movements for racial, gender, and transformative justice. She is the founder and director of Project NIA, a grassroots organization with a vision to end youth incarceration. Mariame is currently a researcher at Interrupting Criminalization: Research in Action at the Barnard Center for Research on Women, a project she co-founded with Andrea Ritchie in 2018. Mariame has co-founded multiple other organizations and projects over the years including We Charge Genocide, the Chicago Freedom School, the Chicago Taskforce on Violence against Girls and Young Women, Love & Protect, the Just Practice Collaborative and Survived & Punished. Mariame serves on the advisory boards of the Chicago Torture Justice Memorials, Critical Resistance and the Chicago Community Bond Fund. Her writing has appeared in numerous publications including The New York Times, The Nation Magazine, The Guardian, The Washington Post, In These Times, Teen Vogue, The New Inquiry and more. She co-authored the guidebook Lifting As They Climbed and published a children’s book titled Missing Daddy about the impacts of incarceration on children and families.  Kaba is the recipient of the Cultural Freedom Prize from Lannan Foundation.