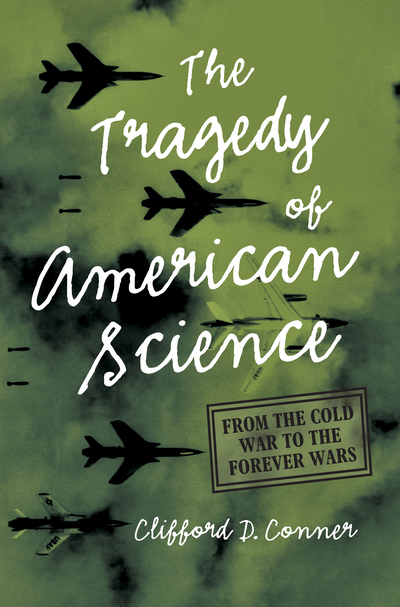 The tragedy of American science is that its direction is determined by private profit rather than by the desire to improve the human condition. As a result, Conner argues, Big Science has been irredeemably corrupted by Big Money. This corruption threatens the air we breathe, the water we drink, the food we eat, and the medicines we take.

The Tragedy of American Science explores how the U.S. economy’s addiction to military spending distorts and deforms science by making it overwhelmingly subservient to military interests. The primary motive driving American science and technology has become the search for new and more efficient ways to kill people. This transforms science from the classic ideal of a creative force for the advancement of humankind into its destructive and antihuman opposite. That those trillions of dollars in resources and scientific talent are not devoted to solving the problems of poverty, disease, and environmental destruction is one of the greatest tragedies of our times.

While the underlying problems may appear intractable, Conner compellingly argues that replacing the current science-for-profit system with a science-for-human-needs system is not an impossible, utopian dream. But to get there, we’ll need to grapple with this important history.

“The history that Conner has laid bare impels all of us, as citizens or working scientists, to avoid the Faustian bargain of American exceptionalism.”

Science for the People Magazine

“Clifford Conner’s examination of the military and corporate capture of science in the US could not be more relevant. He makes the urgent case that human needs, and not profits or militarism, should guide scientific inquiry.”

Sarah Lazare, In These Times

“The Tragedy of American Science makes a strong case for freeing science from the fetters of capital and rededicating it for the good of humanity.”

“I highly recommend this book and consideration of what I take to be its main message: science could have worked wonders if properly used (and if a bit of military budgets were spent on something useful) and perhaps it still can.”

“We should read [Conner’s] book as a political economy of science because science is embedded in a perverse set of cultural constraints and incentives allowing it to be misused and manipulated in a way that endangers our democracy. Conner views science writ large, encompassing theory (disciplinary science) as well as technology… The most rewarding part of the book…is Conner’s analysis of military science since World War II. Among the scientific and technological military projects discussed by Conner, which are rarely investigated in today’s popular press, are cluster bombs, Multiple Independently Targeted Reentry Vehicles, drones, cyberwarfare, the SDI, and nanotechnologies, those ‘tiny insect-mimicking drones that operate in swarms, sneak into private dwelling spaces of targeted victims, and blow their heads off with microexplosive bombs…”

“American political and intellectual culture today, including scientific culture, is in a state of decay. The denial of human-caused climate change, the destruction of scientific records by the government, the attack on public education, and most recently, the Center for Disease Control’s banishing words such as “scientific-based” and “evidence-based” are significant indications of this. The policies of the masters of corporate greed and the military-industrial complex are ruinous. We can fight back by discrediting their junk ideas and magical thinking. Cliff Conner’s book helps immensely in this effort.”

“Clifford Conner’s remarkable study does so much more than simply ask and answer how American science has become weaponized over the past century. The Tragedy of American Science is a thorough and vividly engaging account—a history of science that draws deeply on social and geopolitical analysis, and with excellently crafted case studies. It is a call to rethink the myths of American exceptionalism that, under the guise of scientific altruism and U.S. foreign policy, have cultivated a science-for-profit system. Despite its unflinching disdain for the corporatization of research, policy, and practice, Conner’s story is not a pessimistic one. Instead, with keen insight, wit, and an empathetic eye on the future, Conner helps rescue the promise of science from the tragedy it has become.”

Jacob Blanc, author of Before the Flood: the Itaipu Dam and the Visibility of Rural Brazil

“Cliff Conner has brought together journalists, advocates, leakers, and litigators to restore the principles of free inquiry from its perversions by the big lies of Big Food, Big Oil, Big Pharma, and Big War. The method is true and it is simple: they lift the big rock, and let fresh air and sunlight expose the little, nasty, squirmy things underneath.”

Praise for Conner’s A People’s History of Science:

“Cliff Conner’s A People’s History of Science is a delightfully refreshing new look at the history of science. I know of nothing like it…” —Howard Zinn

“Conner writes clearly and skillfully shows connections as he ranges across time periods and disciplines from medicine to art to astronomy.” —Publishers Weekly

Clifford D. Conner is a historian of science at the School of Professional Studies, CUNY Graduate Center. He is the author of A People’s History of Science (Bold Type Books, 2005) and biographies of three revolutionaries: Jean Paul Marat, Arthur O’Connor, and Colonel Despard.