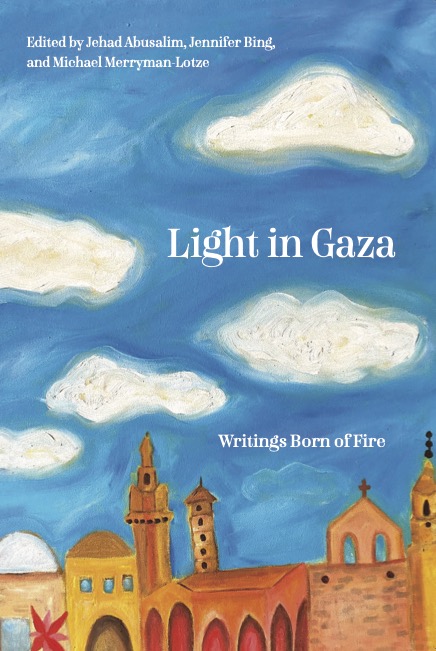 Imagining the future of Gaza beyond the cruelties of occupation and Apartheid, Light in Gaza is a powerful contribution to understanding Palestinian experience.

Gaza, home to two million people, continues to face suffocating conditions imposed by Israel. This distinctive anthology imagines what the future of Gaza could be, while reaffirming the critical role of Gaza in Palestinian identity, history, and struggle for liberation.

Light in Gaza is a seminal, moving and wide-ranging anthology of Palestinian writers and artists. It constitutes a collective effort to organize and center Palestinian voices in the ongoing struggle. As political discourse shifts toward futurism as a means of reimagining a better way of living, beyond the violence and limitations of colonialism, Light in Gaza is an urgent and powerful intervention into an important political moment.

“Light in Gaza is a strong, honest presentation of today’s Gazans, a necessary read that provides a good understanding of the humanity of the Palestinians in Gaza.”

“This book is rich in insights from Gazans living under Israel’s brutal siege as well as those living abroad. The editors and authors are determined to start a conversation about Gaza and to break “the intellectual blockade” imposed on it. From Jehad Abusalim’s introduction to the last word, these compelling works move from personal reflections to political and economic analysis. They capture the reader and pull them through a journey that is as uplifting as it is heartbreaking that it should have to be lived at all.  It will not leave you unmoved and will reinforce your determination to strive for Palestinian freedom.”

“Because of Israel’s blockade, I’ve only been able to go to Gaza once. Everyone I spoke to there could tell me about the unimaginable hardship and trauma they’d experienced. But what stayed with me most was something I hadn’t expected: The unquenchable optimism and humor of Palestinians there. Reading Light in Gaza a decade after my visit brought that feeling flooding back. This brilliant, funny, inspiring collection of stories and essays by writers in Gaza was exactly what I needed to reinvigorate my hope and determination to work for a future that uplifts us all.”

“A must read for anyone interested in learning about Gaza, from the Palestinians of Gaza themselves. Powerful and engaging.”

“Gaza is often referred to as an ‘open-air prison,’ because it is so hard for messages, images or bodies to get out, or for resources to get in. Light in Gaza breaks through the prison walls and gives us a unique opportunity to hear and learn from those living under Israeli occupation in Gaza. Their voices are filled with pain, loss, frustration, anger, but most of all, hope. This powerful and beautifully crafted collection is one that readers must engage with heads and hearts wide open.”

“An emotionally and intellectually sophisticated collection that is deep, processed and enlightening.” —Sarah Schulman

“A book that embodies the central paradox all Gaza-watchers are aware of: while Israel – aided by Egypt and tolerated by the international system – constantly sharpens tools to control and brutalize Gaza, Gaza insists on its agency, its dignity and its imagination. Read these writings – literally ‘born of fire’ for the wealth and variety of their ideas and for their grounding of the aspirations and dreams of Palestinian Gazans. “

“Light In Gaza is essential reading, not least because it reflects the voice of a people who are routinely and egregiously robbed of their basic humanity. It also represents a profound challenge to anyone who reads it. One author asks, “Can a story or a poem change the mind? Can a book make a difference?” The answer, as ever, is up to us all.”

“As Mahmud Darwish wrote as early as 1973, “we do injustice to Gaza when we turn it into a myth”. This is why “Light in Gaza”, through its insightful collection of essays and poems, offers such a unique picture of the Palestinian experience in a territory cut off from the world for a decade and a half.”

“The poignant first-person essays in this wide-ranging anthology have the greatest and rarest of virtues: they are portraits–brave, tender, resilient–of life in Gaza by the people who actually live it.”

Nathan Thrall, author of The Only Language They Understand

Jehad Abusalim is the Education and Policy Associate of the Palestine Activism Program at the American Friends Service Committee. He is completing his PhD in the History and Hebrew and Judaic Studies joint program at New York University. His main area of research is Palestinian and Arab perceptions of the Zionist project and the Jewish question before 1948. An accomplished speaker and writer, Jehad combines his passion for history with his commitment to activism and policy change work. Jehad’s family continues to live in Gaza.

Jennifer Bing has worked with AFSC’s Palestine-Israel Program since 1989. Based in Chicago, she organizes events, national speaking tours, exhibits and trainings, and coordinates AFSC’s education and advocacy work on the campaigns Israeli Military Detention: No Way to Treat a Child and Gaza Unlocked. In this role, she works closely with faith organizations and human rights groups throughout the U.S. Jennifer has appeared in numerous media outlets including Truthout, Worldview/WBEZ, Mondoweiss, Electronic Intifada, Alternet, Chicago Tribune, Chicago Reader, Friends Journal, and The Washington Post. She is also a regular contributor to AFSC’s Acting in Faith and News and Commentary blogs. Jennifer is a Quaker and an active member of the Quaker Palestine Israel Network.

Mike Merryman-Lotze is the American Friends Service Committee’s Palestine-Israel Program Director. He coordinates AFSC’s Israel and Palestine focused advocacy and policy programming, working closely with AFSC’s offices in Jerusalem, the West Bank, Gaza, and throughout the US. From 2000 through 2003 Mike worked as a researcher with a human rights organization in the West Bank, and from 2007 through 2010 he worked in Save the Children UK’s Jerusalem office managing child rights and child protection programming. Between these two experiences he worked for an international development NGO managing community and local government development programs in Lebanon, Jordan, and Yemen.