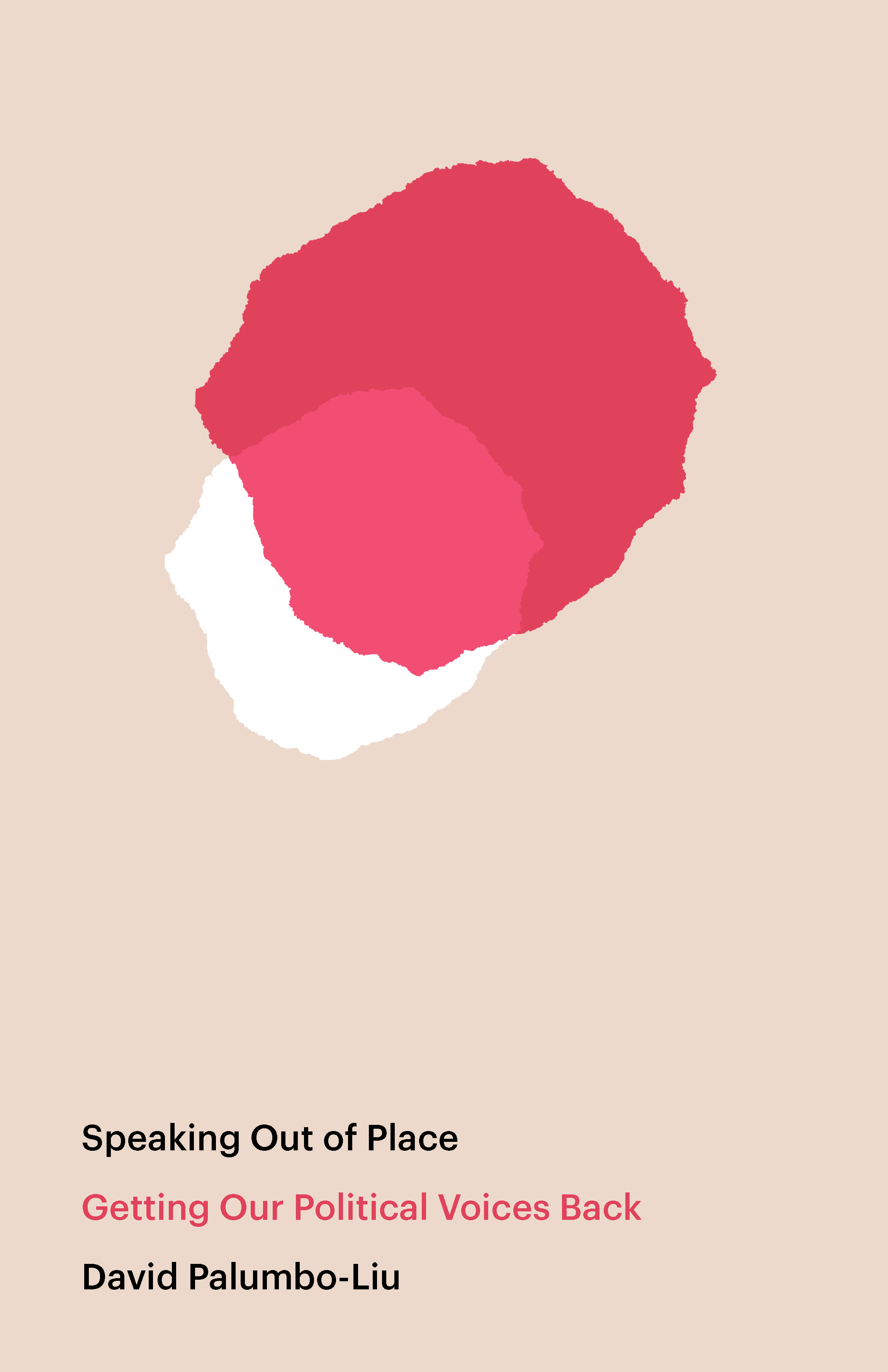 SPEAKING OUT OF PLACE
Making the Humanities Active

Speaking Out of Place asks us to reconceptualize both what we think “politics” is, and our relationship to it. Especially at this historical moment, when it is all too possible we will move from Trump’s fascistic regime to Biden’s anti- progressive centrism, we need ways to build off the tremendous growth we have seen in democratic socialism, and to gather strength and courage for the challenges, and opportunities that lie ahead.

“David Palumbo-Liu’s Speaking Out of Place is a wake-up call to the twin dangers of fascism and a no-less cruel and ecocidal neoliberalism. Brilliant, clear-eyed, wide-ranging and erudite without being esoteric, this book is a vital assault on the repressive amnesia that obliterates the memory of even our most recent struggles. Palumbo-Liu reminds us that we already have all that we need to reimagine our societies and ourselves, to re-forge the solidarity necessary to get us through such catastrophic times, to make this planet a place where voices clamor outside of the violent control of capital, loudly and freely, alive.”

“In the face of accelerating fascism and a planet on fire, David Palumbo-Liu provides a road map for finding our political voices by speaking “out of place.” This is an urgent call to seize the moment before it’s too late.”

Roxanne Dunbar-Ortiz, author of Not “A Nation of Immigrants,” Settler-Colonialism, White Supremacy, and a History of Erasure and Exclusion

“David Palumbo-Liu’s most recent work is a clarion call, an incisive commentary on our times, and an impressive work of passion and moral clarity.  Focusing on forms of contemporary oppression and new social movements, Palumbo-Liu insists upon the centrality of voice and place to the most pressing issues of our time.  His writing draws on social and political theory, poetry, activist writing, to show us that the ideologies that still clutch us have as their primary concern the individual’ as economic actor, and ‘the market’ and its profit-driven values as a poor way to define the public sphere.  In contrast, he allies with those who are generating the value of human and humane interdependence, of commonly shared goods, and ideals of social and economic equality so often brutally dismissed as fairy tales. But in this work we see how every critical analysis of homelessness, displacement, internment, violence, and exploitation is countered by emergent and intensifying social movements that move beyond national borders to the ideal of a planetary alliance. As an activist and a scholar, Palumbo-Liu shows us what vigilance means in these times.  This book takes us through the wretched landscape of our world to the ideals of social transformation, calling for a place, the planet, where collective passions can bring about a true and radical democracy.”

“Months after the most historic protests in our lifetimes, we continue to confront the same stubborn inequities, crises and catastrophes. This stubborn continuity compels us to reevaluate our common assumptions about the nature of the problem. It compels us to renew our political commitments to change but not necessarily in the same ways that we have before. Most of all, the ongoing suffering and despair in our societies compel us to think anew and creatively for effective, sometimes new and sometimes drawing on the historical ways that ordinary people have confronted the powerful. It compels us to be radical by grabbing hold at the root of our problem—a neoliberal, capitalist world order built on human suffering and abject inequality. David Palumbo-Liu’s Speaking Out of Place is a deeply moral and utterly human meditation on the nature of our despair but the means by which it can be transformed. Most of all, he argues that what is missing is our sense of place, belonging and mutuality that, when intact, showcases our connection and potential for solidarity in our shared struggle for a humane and just world. Is the exact book we need for the troubled historical moment through which we are living.”

“In Speaking out of Place David Palumbo-Liu has brought to the fore the type of text that is rare in our current culture. There is a sort of transversal vector in play that brings with it the unexpected and at the same time the familiar. It is a gem. I loved reading it.”

“David Palumbo-Liu gives us hope for a world on fire. Digging deep into our common humanity, he urges us to speak, to organize and to fight for justice wherever we live, and to stand down reaction wherever it resides. From Palestine to the Amazon, Palumbo-Liu reminds us to take back the planet that belongs to us, to love ourselves, and each other.”

David Palumbo-Liu is the Louise Hewlett Nixon Professor, and Professor of Comparative Literature, at Stanford University. Besides his academic books on race, culture, ethics and politics, he writes for Jacobin, Truthout, The Nation, the Guardian and other venues.